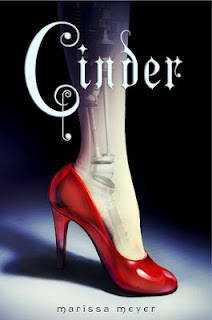 Cinder, a gifted mechanic in New Beijing, is also a cyborg. She's reviled by her stepmother and blamed for her stepsister's sudden illness. But when her life becomes entwined with the handsome Prince Kai's, she finds herself at the centre of a violent struggle between the desires of an evil queen - and a dangerous temptation.

Cinder is caught between duty and freedom, loyalty and betrayal. Now she must uncover secrets about her mysterious past in order to protect Earth's future. (Summary from MacMillan's website)

If you haven't heard about Cinder, I'm not sure where you've been for the past few months. The buzz this book has gotten has been insane! I haven't heard a negative word about it. How could I, considering how amazing this book is? After reading all the rave reviews, I knew I had to pick up a copy of Cinder. I mean, a re-imagined version of Cinderella as a cyborg? What's not to love?

I'm a huge fan of fairy tales; I have been since I was a kid. Combine that with my serious love of science fiction, and Cinder had me from the first page. Meyer's creativity breathes new life into this magnificent fairy tale, and the characters she's created are fantastic: Cinder, the over-worked mechanic, Prince Kai, the reluctant leader, Iko, the robot with tons of personality, and what would a fairy tale be without an evil queen, this one from the moon! The story, although slightly predictable, was a page-turner. I found myself unable to think about anything else until I found out what happened next. The chemistry between Kai and Cinder was endearing, and watching Cinder gather her strength and face her own fears made me cheer. I loved the futuristic world in which it all took place, and found myself completely invested in the fate of these characters. The story wove together beautifully, already establishing a base for the next three novels in the series. The Lunar Chronicles is going to be a fantastic series. I can tell already!

Another thing I love about Cinder is that it was started as a NaNoWriMo novel. If you haven't heard of National Novel Writing Month (website here) it's in November and each participant tries to write a 50,000 word novel in that month. It's crazy, intense, and makes November my favorite month of the year. I have participated for the past three years, and have been successful each time. To know that this amazing novel started off from one of my favorite things in the world is inspiring. And very encouraging. If she could do it maybe, just maybe, I could too (maybe).


Check out this book, if you haven't already. Marissa Meyer's debut novel has instantly launched her onto my auto-buy list! I expected a great story, but it was even better. I cannot wait to read Scarlet, Meyer's take on Little Red Riding Hood. Also, check out Cinder's trailer below!

- Ciara who is lost at midnight
Find this book: Amazon | Goodreads | MacMillan's website
Posted by Ciara (Lost at Midnight) at 10:14 AM