Waiting On Wednesday is a weekly meme hosted by Jill over at Breaking the Spine, in which bloggers talk about the books they are most eager for!
This week's pick: Fear by Michael Grant
Publisher: Harper Teen
Release Date: April 3rd, 2012 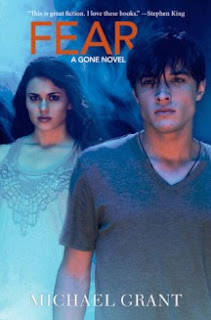 It's been one year since all the adults disappeared. Gone.
Despite the hunger and the lies, even despite the plague, the kids of Perdido Beach are determined to survive. Creeping into the tenuous new world they've built, though, is perhaps the worst incarnation yet of the enemy known as the Darkness: fear. Within the FAYZ, life breaks down while the Darkness takes over, literally—turning the dome-world of the FAYZ entirely black. In darkness, the worst fears of all emerge, and the cruelest of intentions are carried out. But even in their darkest moments, the inhabitants of the FAYZ maintain a will to survive and a desire to take care of the others in their ravaged band that endures, no matter what the cost. (Summary from Harper Teen's website)

How many days until this book comes out again? I've been waiting almost a year to get the next installment in one of the best most terrifying series out there: Gone by Michael Grant. I don't think I've ever been more disturbed by a book than I have been reading this series. It's not for the faint of heart, let me tell you! But, if you can look past the gore and scares, this book is filled with so much heart and the characters with so much determination, it's amazing to read about.

I'm kind of terrified to read this book. I mean, it's called Fear, and considering how scary the last four books have been, I can only imagine what horror's await the kids of Perdido Beach. And I only have to wait just one more short week! I highly recommend this series, if you can handle terrifying monsters, vicious people, and more fear than you can imagine. Grant's frightful world will leave you gasping for breath and cowering under the covers all the while keeping your eyes glued to the page. It's wonderful.