Waiting on Wednesday (4): The Golden Lily by Richelle Mead

Waiting On Wednesday is a weekly meme hosted by Jill over at Breaking the Spine, in which bloggers talk about the books they are most eager for!
This week's pick: The Golden Lily by Richelle Mead
Publisher: Razorbill
Release Date: June 12th 2012 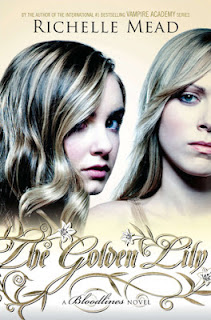 (Summary from Goodreads): Sydney Sage is an Alchemist, one of a group of humans who dabble in magic and serve to bridge the worlds of humans and vampires. They protect vampire secrets—and human lives.

Sydney would love to go to college, but instead, she’s been sent into hiding at a posh boarding school in Palm Springs, California–tasked with protecting Moroi princess Jill Dragomir from assassins who want to throw the Moroi court into civil war. Formerly in disgrace, Sydney is now praised for her loyalty and obedience, and held up as the model of an exemplary Alchemist.

But the closer she grows to Jill, Eddie, and especially Adrian, the more she finds herself questioning her age-old Alchemist beliefs, her idea of family, and the sense of what it means to truly belong. Her world becomes even more complicated when magical experiments show Sydney may hold the key to prevent becoming Strigoi—the fiercest vampires, the ones who don’t die. But it’s her fear of being just that—special, magical, powerful—that scares her more than anything. Equally daunting is her new romance with Brayden, a cute, brainy guy who seems to be her match in every way. Yet, as perfect as he seems, Sydney finds herself being drawn to someone else—someone forbidden to her.

When a shocking secret threatens to tear the vampire world apart, Sydney’s loyalties are suddenly tested more than ever before. She wonders how she’s supposed to strike a balance between the principles and dogmas she’s been taught, and what her instincts are now telling her.

Should she trust the Alchemists—or her heart?

Oh, Richelle Mead. She has been one of my favorite authors since I first read Vampire Academy when I was 15. Although that series has ended (cue the tears) I'm so happy to still be able to read about the intriguing world of vampires, forbidden love, and kick-butt characters. When Mead announced the Bloodlines series I was crazy excited, especially because it featured some of the characters I loved. I actually threw a Bloodlines party, although it was not a great success. (My Last Sacrifice release party, on the other hand, was a roaring success, including a Vampire Academy trivia quiz, a VA themed scavenger hunt, and costumes).  I was up early the next day to pick up Bloodlines and I loved every page of it! Very different from her Vampire Academy series, but fantastic in its own right. I had always liked Sydney, but seeing things through her perspective made me adore her! What a girl. I can't wait to how she grows and changes over the series. It's going to be great to read about!


The Golden Lily is going to be fantastic. I haven't read the summary yet, but I'm sure the book is going to be filled with sarcasm, suspense, and budding romance (hopefully between a certain Alchemist and a pretty boy Moroi)! If you haven't checked out the Bloodlines series (or Vampire Academy series) I HIGHLY recommend them. There's something in each book for everyone! And don't be fooled by the cheesy titles, or covers, these books are filled with heart, passion, and break-your-heart-in-half moments. You will not be disappointed!

The Golden Lily, one of my most anticipated books of the entire year, is out June 12th, 2012! A week earlier than originally!


Find this book: Amazon | Goodreads | Richelle Mead's website
Posted by Ciara (Lost at Midnight) at 12:00 AM