Waiting on Wednesday (3) - Girl of Nightmares by Kendare Blake

Waiting On Wednesday is a weekly meme hosted by Jill over at Breaking the Spine, in which bloggers talk about the books they are most eager for!
This week's pick: Girl of Nightmares by Kendare Blake
Publisher: Tor Teen
Release Date: August 7th, 2012 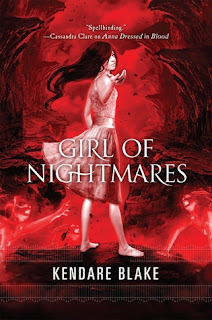 In this follow-up to Anna Dressed in Blood, Cas begins seeing Anna everywhere: sometimes when he’s asleep, and sometimes in waking nightmares. But something is very wrong. These aren’t just daydreams. Anna seems tortured, torn apart in new and ever more gruesome ways every time she appears.

Cas doesn’t know what happened to Anna when she disappeared into Hell, but he knows she doesn’t deserve whatever is happening to her now. Anna saved Cas more than once, and it’s time for him to return the favor. (Summary from Goodreads)

Since I posted my Anna Dressed in Blood review yesterday, I thought it was fitting to make my WoW pick it's sequel: Girl of Nightmares! Let's start off with the cover cause it is stunning! According to Kendare Blake, the cover might change slightly, but I'm sure it'll still be as gorgeous. I love that the girls match up, and the cover keeps with the theme of the first book. The hands reaching up towards Anna, and her hand beckoning the reader towards hell is stunning. Such great work!

The story itself is sure to be as captivating as Anna Dressed in Blood! I can't wait to jump back into the ghostly world Kendare Blake created, and wrap up this fabulous two book series. Cas stole my heart with his passion and sarcastic attitude in the first novel, and I'm sure he's going to make me fall in love with him more in the second. I'm going to be sad to see this series end, but it's sure to be a heart-stopper.


Girl of Nightmares is out August 7th, 2012! Just in time for my nineteenth birthday!


-Ciara who is lost at midnight
Posted by Ciara (Lost at Midnight) at 12:00 AM