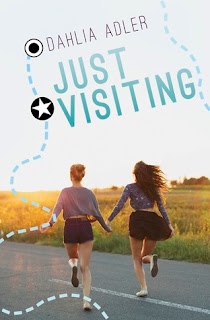 Reagan Forrester wants out—out of her trailer park, out of reach of her freeloading mother, and out of the shadow of the relationship that made her the pariah of Charytan, Kansas.

Victoria Reyes wants in—in to a fashion design program, in to the arms of a cute guy who doesn't go to Charytan High, and in to a city where she won't stand out for being Mexican.

One thing the polar-opposite best friends do agree on is that wherever they go, they’re staying together. But when they set off on a series of college visits at the start of their senior year, they quickly see that the future doesn’t look quite like they expected. After two years of near-solitude following the betrayal of the ex-boyfriend who broke her heart, Reagan falls hard and fast for a Battlestar Galactica-loving, brilliant smile-sporting pre-med prospective... only to learn she's set herself up for heartbreak all over again. Meanwhile, Victoria runs full-speed toward all the things she thinks she wants… only to realize everything she’s looking for might be in the very place they've sworn to leave.

As both Reagan and Victoria struggle to learn who they are and what they want in the present, they discover just how much they don't know about each other's pasts. And when each learns what the other’s been hiding, they'll have to decide whether their friendship has a future. (Summary from Goodreads)


Road trips and friendships and coming-of-age! These are three of my favourite things to read about and Just Visiting seems to have them in spades. Dahlia Adler is a smart, lovely human and her books sound just as smart and lovely and I seriously can't wait to get a copy of Just Visiting. I mean, just look at that beautiful cover! I want it to be my life, basically.

If you don't have Just Visiting on your TBR (or any of Dahlia's other books) what are you waiting for! Run over to Goodreads!

Review: A History of Glitter and Blood by Hannah Moskowitz 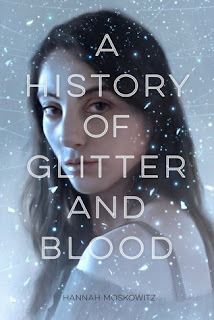 Sixteen-year-old Beckan and her friends are the only fairies brave enough to stay in Ferrum when war breaks out. Now there is tension between the immortal fairies, the subterranean gnomes, and the mysterious tightropers who arrived to liberate the fairies. But when Beckan's clan is forced to venture into the gnome underworld to survive, they find themselves tentatively forming unlikely friendships and making sacrifices they couldn't have imagined. As danger mounts, Beckan finds herself caught between her loyalty to her friends, her desire for peace, and a love she never expected. This stunning, lyrical fantasy is a powerful exploration of what makes a family, what justifies a war, and what it means to truly love. (Summary from Goodreads)


I went into this book a bit apprehensively. The concept sounded imaginative, but I saw lots of people dnf-ing and got a little concerned. I try not to let others influence how I read, but I can't deny those dnfs made me nervous. I really didn't need to though because A History of Glitter and Blood completely enthralled me. From the start, I was engaged, in love, and enchanted. This book was unlike anything I've ever read before and, even months later, I'm still fascinated by it.

Although I personally loved this book, I can see where people might not. It's weird. The writing style is jumpy at points, the concept slightly disturbing and not easy to read. The beginning is tough to get into, the structure takes some mental adjusting, but it is so worth it. There was just so much going on in this book, in the very best way. I was trying to describe this book and all it's complexities and it's just so hard. Themes of racism, sexism, class structure, and more were expertly woven into the fabric of this story. It wasn't like being hit over the head with a Message, but rather being brought along, being completely immersed in it and suddenly realizing just what it all meant.

I really enjoyed how this book was structured. The story went back and forth in time, but the flashbacks just created a fuller picture of the characters and plot. There were pictures and excerpts which gave it a kind of history book feel, and made everything seem more real. I didn't feel like I was reading a novel, but rather an account of a very real war featuring very real characters.

And those characters! Scrap stole my heart and pissed me off all at the same time. I adored watching Beckan transform throughout this novel and Josha coming into his own. Even Tier who I was not really a fan of at first really won me over. This book was gritty and raw and the characters didn't come out of this war unscathed. They were each impacted in their own way by what they went through. They didn't always know how to help each other, but they tried. There was this bond between them that was so incredible to read about. These characters honestly felt so real. They may have been fairies and gnomes and tightropers but they were realistic and moving and powerful. I really can't express how much I loved them.

I feel like there's so many different avenues to view this book from, so many positive aspects. I've heard lots of talk about the sex positive plot, its discussion of war, and so forth. But the thing I loved most about this book was the exploration of how history is written and how stories are told. The narrator (who I'm not going to reveal even though it is pretty obvious) struggles with how to write the story. There's commentary throughout the book as they grapple with how to tell what has happened to them. This idea of the perspective of history, how skewered it can be, isn't a new one. But it was fascinating. How was this story being told? How can we really tell what is the truth? Although the narrator tries, there's no way for them to completely detach themselves from this recounting of their story. History is full of emotion because it's about people; they just take that part out of textbooks. This book was like a diary, a scrapbook, a glimpse into the life of these beautiful people and the horrors of war they had to face.

Honestly, I could write an essay on this book. This review doesn't even touch on half the things I want to talk about. I can never cover everything enchanting and powerful about this book. I just urge you to give it a chance. It's an incredible, powerful read that I love with all my heart.

Email ThisBlogThis!Share to TwitterShare to FacebookShare to Pinterest
Labels: A History of Glitter and Blood, ARC, Hannah Moskowitz, Review

Where in the world did September go?

Actually though, I feel like we just skipped over September it went by so fast. The blog was silent last month because I was So Dang Busy and was having Lots Of Trouble writing reviews. I didn't get much reading done either! But, I had an incredible September that I wouldn't trade for the world. Here's an update!


Top Three Things I Did (Outside of Reading!) 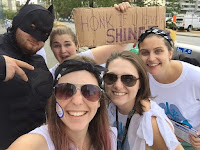 - This was my third year being a guide (my first as an exec member) and it was incredible, exhausting, and memorable. I didn't get much of anything done that first week of September (and I'm still playing catch-up!) but it was totally worth it. 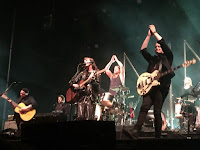 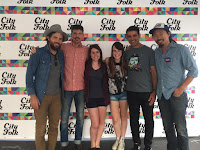 - CityFolk Fest relaunched this year and featured an absolutely incredible line-up. My favourite bands almost NEVER play in Ottawa, so having two of them in one weekend was mind-boggling. I went (along with Jess from Read My Breath Away!) to three of the five days and got to see The Sheepdogs, The Avett Brothers, Of Monsters and Men, and Passenger. I was basically in musical heaven. And then the next week (not part of CityFolk) I got to see the incredible Kodaline live! It was quite the month for live music here in Ottawa. 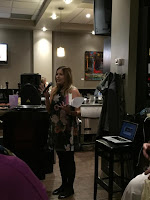 - Another thing we don't have a lot of in Ottawa is bookish events. So when they do happen, it's always hugely exciting. This month, the lovely Amy Alward launched her new book Madly here in Ottawa! Amy is so sweet and wonderful and I had an awesome time at the launch party. I'll do a full recap (hopefully) this week!

Soundtrack of My September

I don't download a ton of new music last month, but I did listen to a couple of songs on repeat.

"Laundry Room" - The Avett Brothers
Favourite Lyric: "I am a breathing time machine, I'll take you all for a ride"
Why I Love It: Man, this song just gets me in the gut. I really do love everything about it.

"Victorious" - Panic! at the Disco
Favourite Lyric: "50 words for murder, and I'm every one of them."
Why I Love It: This song was only released at the end of September but I've listened to it approximately a thousand times since then. I'm obsessed.


Looking Forward to October
- October will probably be less life-busy but definitely more school-busy. It'll be midterm/assignment season soon which means I'll be hiding from the world and frantically flipping through textbooks. But! I hope I'll actually have time for more reading and catching up on blog stuff. I've already read two books (which is more than half of what I read last month!) so I have a good feeling!

What did you do last month? What are you most looking forward to in October?

Let me know in the comments!