Waiting On Wednesday (5): I Hunt Killers by Barry Lyga

Waiting On Wednesday is a weekly meme hosted by Jill over at Breaking the Spine, in which bloggers talk about the books they are most eager for!
This week's pick: I Hunt Killers by Barry Lyga
Publisher: Little, Brown Books
Release Date: April 3rd, 2012 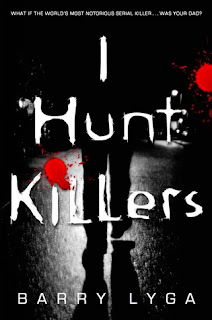 What if the world's worst serial killer...was your dad?
Jasper (Jazz) Dent is a likable teenager. A charmer, one might say.
But he's also the son of the world's most infamous serial killer, and for Dear Old Dad, Take Your Son to Work Day was year-round. Jazz has witnessed crime scenes the way cops wish they could--from the criminal's point of view.
And now bodies are piling up in Lobo's Nod.
In an effort to clear his name, Jazz joins the police in a hunt for a new serial killer. But Jazz has a secret--could he be more like his father than anyone knows?

Doesn't that description just sound so intriguing? As soon as I heard about it, I knew I had to read it. It looks to be a combination of thriller and heart, and I'm sure I'm going to love Jazz! Recently, I've been hearing a lot of praise from authors and bloggers about I Hunt Killers which is making me anticipate it more and more! It happens to be released on one of my most anticipated release days of the year: April 3rd (some other releases that day include Holly Black's Black Heart, and Fear by Michael Grant). I'm definitely going to pick up a copy the day it comes out! Hopefully it's as great as it looks to be!

What do you think? What are your picks this week?

-Ciara who is lost at midnight
Posted by Ciara (Lost at Midnight) at 12:00 AM