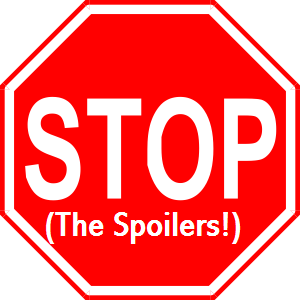 Hi, everyone!
Today I wanted to talk about something that drives me crazy: spoilers. I know I'm not the only one that wants to pull their hair out when the ending of a book is spoiled for you. It could be just a friend talking about it, or a reviewer forgetting to write *spoiler alert* on their post, anyway it happens, its aggravating.
I'm what apparently is called a 'purist'. Which makes a lot of sense. Why is that? Well, I don't read spoilers. Ever. I never read the last page of a book first. I don't look at quotes of the day (usually). I don't read chapter excerpts or teasers. I don't watch book trailers. I don't even read cover summaries most of the time. I don't read anything that could contain any sort of spoiler. I'm a very extreme case, and I understand that. But, I hate spoilers. Too many times I've read the back of the book, only to have it tell me something that doesn't happen until 100 pages in. It's maddening! I also get frustrated when people say things such as "OMG the ending!", because that is a spoiler to me. Now I know something crazy happens at the end, so I'm not shocked. That can ruin a book for me. And it's happened to me countless times (particularly with a certain YA author of a popular series who happens to tweet spoilers ALL THE TIME). If I buy I sequel, or the next book in the series I NEVER read the summary. (Seriously. To name a few examples I currently own Pandemonium, Clockwork Prince, Unbroken, and Silence and I don't have a clue what they are about. Just that they'll continue the story of the previous novels) That's just who I am.

A lot of people think I'm odd for the extent I go to to avoid spoilers (see a post later in the week for how far I went for The Fault in Our Stars), but it doesn't bother me. I love getting shocked. I love reading a story and having no clue where it's going to go. I love picking up a book, without the knowledge of what it contains. It's wonderful. On this blog, I'll do my best to avoid spoilers. No review will end with a "And the ending!" paragraph. But if I see that a book trailer is out, I'll post it. I won't watch it, but that doesn't mean you can't! Same goes with summaries. This blog will be as much as of a spoiler-free zone as I can make it!

I really want this blog to be a great place to visit, and place to keep you informed. I'm still getting the hang of everything, but I'm loving it so far! I hope you guys are too!

How about you? Don't mind spoilers? Hate them? I would love to know your opinion!