All Covered Up: Descendant by Lesley Livingston

Hello all you awesome people!

I haven't done an All Covered Up in a little while, even though there have been an insane amount of covers released! Some of them gorgeous, some not so much, but all of them are making me even more excited for the books they cover.

Recently, the cover and title announcement for the second book in the Starling series written by the fantastic (and Canadian!) Lesley Livingston was released! And without further ado... 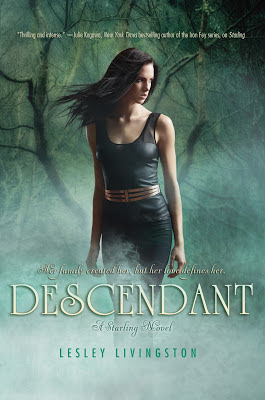 Fennrys drew his sword, sank into a crouch, and readied himself for the fight, the kill . . .
for the wave of blood-red battle madness that would carry him forward.

Because Fenn would be damned if he let Mason down again.


The last thing Mason Starling remembers is the train crossing a bridge. An explosion . . . a blinding light . . . then darkness. Now she is alone, stranded in Asgard—the realm of Norse legend—and the only way for her to get home is to find the Spear of Odin, a powerful relic left behind by vanished gods.
The Fennrys Wolf knows all about Asgard. He was once trapped there. And he’ll do whatever it takes to find the girl who’s stolen his heart and bring her back—even if it means a treacherous descent into the Underworld. But time is running out, and Fenn knows something Mason doesn’t: If she takes up the Spear, she’ll set in motion a terrible prophecy. And she won’t just return to her world . . . she’ll destroy it.
In this pulse-pounding sequel to Starling, Lesley Livingston delivers another electrifying blend of nonstop action and undeniable romance that will leave readers breathless.

Now, admittedly, I haven't read Starling yet but I know it'll be fantastic and hilarious, just like every other Lesley Livingston book. And I can't wait to dive right in!

What do you guys think of the cover and title? Make sure to stop by Lesley Livingston's blog for a giveaway for Starling and/or Descendant!

Email ThisBlogThis!Share to TwitterShare to FacebookShare to Pinterest
Labels: All Covered Up, Lesley Livingston, Starling