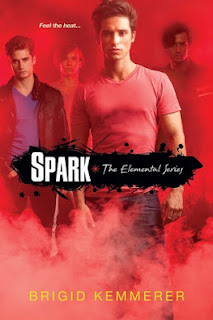 Gabriel Merrick plays with fire. Literally. Sometimes he can even control it. And sometimes he can't. Gabriel has always had his brothers to rely on, especially his twin, Nick. But when an arsonist starts wreaking havoc on their town, all the signs point to Gabriel. Only he's not doing it. And no one seems to believe him. Except a shy sophomore named Layne, a brainiac who dresses in turtlenecks and jeans and keeps him totally off balance. Because Layne has a few secrets of her own...


If you read my review of Storm, you'll know I absolutely loved it. It was addicting, intriguing, and had some seriously hot boys in it. The idea was something I'd always been interested in, and it was really well done. Spark, I sadly have to say, I just didn't enjoy as much as Storm. I really really wanted to love it, and parts of it I did adore. But, there were lots of things I had issues with, and I just couldn't give it five stars.

The concept was still brilliant. Seriously, I have always said the most amazing super power would be being able to control the elements. And Brigid Kemmerer really does well exploring the concept. In Spark, the focus was less on the brothers and being Elementals and more on Gabriel's control and the romance between him and Layne. And I think that's where I found faults.

Oddly enough, the thing I liked least about Spark was the romance. When it started, all I could think about was how cliche it was. I mean, the hot jock guy falls for the shy nerdy girl? It's in countless stories. Sometimes, it works. Other times, it feels a bit forced and I felt like this fell into the "forced" category. I didn't really care for Layne that much. She just made no impression on me whatsoever. The only time I really though "Yes, good job Layne!" was when she threw out a witty one-liner at her bullies (which, seriously rocked). Otherwise, I just simply didn't feel invested in her as a character. I think one of the issues was Becca. I loved Becca. She was so fierce, funny, and such a great and interesting character. I loved her narration and her romance with Chris. In comparison, Layne just felt flat.

Gabriel, on the other hand, was anything but dull. I have adored all of the Merrick brothers and Gabriel always had me intriguied. What was behind all that anger? How much had his parent's death affected him? I wanted to dive right into this head and Spark did not disappoint there. It was fascinating watching him come into his own, to watch him control such a wild element. There was so much to his character, I just kept wanting to know more. The best part for me (although it wasn't a huge part) was the interactions between the Merrick brothers. In this book, we got to see a lot more of Michael than the previous novel. I loved getting a new outlook on the oldest brother, and watching him open up to Gabriel. All the brothers have gone through so much, and even though they fight (a lot) they're always there for each other. As an only child, I love to see what sibling relationships are like, and I think Brigid Kemmerer really captures the ups and downs of family life.

I feel like this book was setting up for something big. Some epic battle or plot line to come in future books. I hope said books contain lots more brotherly bonding, elemental shenanigans and more character exploration.

Although I wasn't a fan of Spark, I'm still a lover of the series. It's got so much going for it and I can't wait until Spirit is in my hands! If you haven't read them, I give the series I giant thumbs-up. It's a series to get addicted to, and you will as soon as you read page one!