On Sunday, a lot of planning and anticipation all came together for the Ottawa Blogger Mix and Mingle! I've been looking forward to this day for a while now, and it was just as fun as I thought it would be!


The five of us hosts (Kathy, Meaghan, Katie, Emilie and me) met up about an hour before the event to put the goodie bags and present together! We gabbed about books and did a mini-swap then hauled all the crazy bags into the car. The event was being held at KS on the Keys, a yummy restaurant in the east end of town.

There were eleven gals that attended the event and it ending up being a ton of fun. We had lots of bookish discussions, some gushing over The Indigo Spell (okay, maybe that was just Katie, Emilie and I) and even a few prizes! We were joined by the lovely author Allison Van Diepen and she answered some of our questions about publishing and book covers! We also got ARCs of her new book Takedown (which she graciously signed!) and I'm really excited to read it! After lunch there was a quiz that took place and I awesomely won a prize! Admittedly, I had seen one of the prizes and knew exactly which bag I wanted to get (I didn't know the questions beforehand though) so I didn't hesitate when picking a prize. It was a pretty Hunger Games shirt. I love it to bits. The other four prize bags included a few ARCs and some swag and went to very worthy winners. After all the competition it was time for a book swap! I got a few really awesome ones from the swap and I can't wait to dive right into read them. After that, a few of us went to Chapters for some more book talk then it was off to our respective homes to relax.

Well, I got to relax for a few hours and then it was off to a staff bowling party. I killed the first round (and won against my team YAY!) and then totally failed the second round. It was tons of fun to hang out with my awesome co-workers though! They put on a great event. And I was also repping Team Dean. Cause yes.


After the party, I practically collapsed at home but not before going absolutely CRAZY when Fun. and Mumford & Sons won Grammys! I've been listening to the former for about three years now and it's been amazing to see them come this far!


I want to say a huge THANK YOU to all the bloggers that came out to the event! Jessica, Kim, Kelsey, Alexandra, Stella & Ashely you guys were all so great! I hope to see you all again in the very near future! And thanks to all the publishers that provided the ARCs and swag! And of course to Allison Van Diepen for taking the time to chat with us crazy bloggers!

So, here's a pic of all the awesomeness I got! 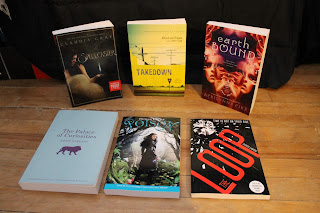 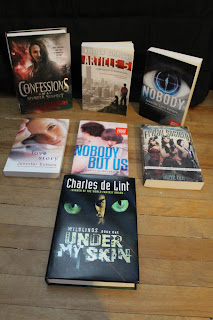 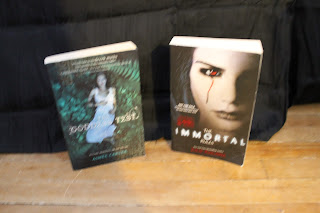 Book Swap/Borrow:
Nobody But Us by Kirstin Halbrook
Nobody by Jennifer Lynn Barnes
The Immortal Rules (Blood of Eden #1) by Julie Kagawa
The Friday Society by Adrienne Kress
Article 5 (Article 5 #1) by Kristen Simmons
Confessions of a Murder Suspect by James Patterson
Under My Skin (Wildlings #1) by Charles de Lint
The Goddess Test by Aimee Carter

All in all, it was an awesome event and I can't wait to meet up with these gals again!