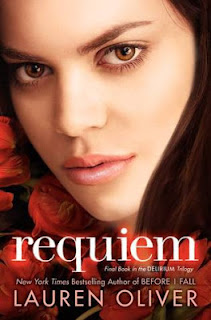 Now an active member of the resistance, Lena has been transformed. The nascent rebellion that was under way in Pandemonium has ignited into an all-out revolution in Requiem, and Lena is at the center of the fight.

After rescuing Julian from a death sentence, Lena and her friends fled to the Wilds. But the Wilds are no longer a safe haven—pockets of rebellion have opened throughout the country, and the government cannot deny the existence of Invalids. Regulators now infiltrate the borderlands to stamp out the rebels, and as Lena navigates the increasingly dangerous terrain, her best friend, Hana, lives a safe, loveless life in Portland as the fiancée of the young mayor. Requiem is told from both Lena’s and Hana’s points of view. The two girls live side by side in a world that divides them until, at last, their stories converge.


This book makes me nervous. I'm always weary (and excited) to read the last book in a series. Endings are really hard to do, and I'm always worried that the big finale will really be a big flop. For Requiem, my fear is doubled. I wasn't a Pandemonium fan (you can read all about why here) but I absolutely LOVED Delirium. I adored the concept, characters, the writing, and the overall stunning beauty of what it means to love. Although the beginning of Pandemonium and many parts throughout were well done, I felt it undermined the message explored in Delirium.

Now, in saying all of that, I'm really looking forward to reading Requiem. Lauren Oliver is an undoubtedly talented writer, and I'm ready to dive back into this shocking world she has created. I hope it'll restore my faith in this series, and I know that it'll be one heck of a story.