*WARNING: Summary contains spoilers for the previous novel. My review is spoiler free though!* 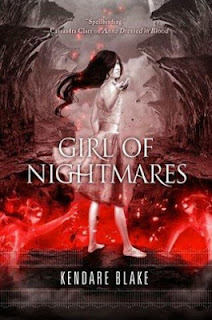 It's been months since the ghost of Anna Korlov opened a door to Hell in her basement and disappeared into it, but ghost-hunter Cas Lowood can't move on.

His friends remind him that Anna sacrificed herself so that Cas could live—not walk around half dead. He knows they're right, but in Cas's eyes, no living girl he meets can compare to the dead girl he fell in love with.

Cas doesn't know what happened to Anna when she disappeared into Hell, but he knows she doesn't deserve whatever is happening to her now. Anna saved Cas more than once, and it's time for him to return the favor.


Guys, I really really love these books. I love the concept, I love the characters, I love the dialogue and I love the covers. There's just so much to love! It took me a little while to read Girl of Nightmares because the idea of not having new Cas and Anna stories to look forward to was heartbreaking. I just adore the two of them. They are such unique characters, and I really enjoy reading about them.

Cas, the broken, determined, and powerful young ghost hunter captured my heart in the first book, and broke it to pieces in the second. Watching him grow as a person and watching his quest to *this would be a spoiler if I said it* made me so proud of him. I loved his spirit, and that he refused to ever give up even when it seemed impossible. He was hurting, he was haunted, but he was ready to stand up and fight. Also, he happens to be a very funny guy, which is always an awesome thing. Anna Korlov will forever be one of my favorite characters. Although we didn't get to see a ton of her in the books, the parts we did she was her strong, feisty self and she just made me love her even more (which I didn't think was possible!) The two of them together make one dynamic pair that I will love to read about again and again. Thomas and Carmel were also spectacular in this book. Their just two crazy adorable people thrown into a situation they never expected. They're loyal, smart and lovable. Two people you would be glad to have as your friends.

The story itself had me absolutely addicted. I was terrified by bits, flipping the pages frantically at points, and was generally desperate to find out how this would all come to a close. There were lots of twists and turns, and even some new and interesting characters! We got to find about a bit more about this crazy world, and explore some new places as well! The scene in Suicide Forest had me honest to goodness petrified. Kendare Blake wrote it so I could visualize every ghost amidst the gorgeous landscape perfectly and I was intensely scared by it. And when it came to the end, I was not ready.

Girl of Nightmares did not play out as excepted. It wasn't a picture perfect end but rather a little twisted, a little heart broken and exactly the story the characters would have. Kendare Blake didn't push her characters into boxes but let them be their unsure, fierce, and brilliant selves. Sometimes they didn't act like we would have wanted them to, they didn't act like what we hoped they would be like. They acted human. They acted like their imperfect selves. The ending, the final story was their final story. It wasn't a perfect one, but it wouldn't be right or true if it we're. And I loved it.

I was so so happy with Girl of Nightmares. My heart hasn't entirely recovered from it, and I already feel the ache of missing Cas and Anna, but it was better than I could have hoped for. Check out this series. Guys, it's so insanely awesome.