*WARNING: Summary contains spoilers for previous novels. My review is completely spoiler-free though!* 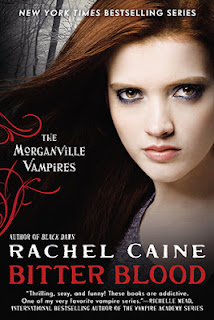 For years, the human and vampire residents of Morganville, Texas, have managed to co-exist in peace. But now that the threat to the vampires has been defeated, the human residents are learning that the gravest danger they face is the enemy within…

Thanks to the eradication of the parasitic creatures known as the draug, the vampires of Morganville have been freed of their usual constraints. With the vampires indulging their every whim, the town’s human population is determined to hold on to their lives by taking up arms. But college student Claire Danvers isn’t about to take sides, considering she has ties to both the humans and the vampires.

To make matters worse, a television show comes to Morganville looking for ghosts, just as vampire and human politics collide. Now, Claire and her friends have to figure out how to keep the peace without ending up on the nightly news… or worse. (Summary from Goodreads)


So, I've read every Morganville book out there and yet, I've never once reviewed one! One of the reasons why is because simply shouting "I LOVE YOU MORGANVILLE. YAY SHANE!" is more of a reaction as opposed to a review. But, I knew I had to review this one because it made me have the FEELS in every way possible.

I kind of want to live in Morganville, despite the whole "run-by-vampires-people-die-A-LOT" thing. I just love it so much. Rachel Caine takes the classic vampire idea and puts her own crazy interesting twist on it. She doesn't glamorize immortality or vampirism but shows how dark and disturbing it can be. In Bitter Blood, the vampires in Morganville are at their most terrifying and their deadliest. The delicate balance Morganville thrived on was tipping, and I was terrified to see who would fall.

One of the best parts of the Morganville series is the characters. Their personalities are all so distinct and they've been artfully developed over the these last thirteen books. As readers, we've seen them go through just about everything possible and we've watched them grow as people. I feel like their old friends and I'm always happy to get to hang out with them again. Claire Danvers, the fierce genuis, Shane Collins, the tough guy with a soft heart, Michael Glass, the musical sweetie, and Eve Rosser, the Goth-girl rebel. The four of them never fail to make me smile and to warm my heart with their love for each other. Bitter Blood saw them go through tremendous heart-break and had them questioning their own loyalty. It killed me to read some scenes and I was near-tears for many parts of the book. There was one scene which had me shaking and made me want to punch the book in hopes that a certain character could feel it. Bitter Blood was an extremely emotional book, one of the most emotional of the series.

It was also a very intense book. Edge-of-your-seat intense. We had to watch Morganville essentially deteriorate from the inside out and some of the best characters (Amelie in particular) lose themselves. Everything was being destroyed and I wanted desperately to see it fixed. There was a lot going on in this novel, and I was rooting for Morganville to survive it. The consequences of its survival, though, look to be trying. No one came out unscathed in this book, myself included.

Bitter Blood just proves that, even thirteen books in, Morganville is still a spectacular and intriguing series. Never repeative, always fresh. Rachel Caine knows her Morganville well, and I cannot wait to see just what she does with it next.