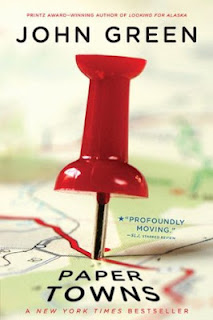 Quentin Jacobsen has spent a lifetime loving the magnificently adventurous Margo Roth Spiegelman from afar. So when she cracks open a window and climbs back into his life–dressed like a ninja and summoning him for an ingenious campaign of revenge–he follows.
After their all-nighter ends and a new day breaks, Q arrives at school to discover that Margo, always an enigma, has now become a mystery. But Q soon learns that there are clues–and they’re for him. Urged down a disconnected path, the closer he gets, the less Q sees of the girl he thought he knew. (Summary from John Green's website)

Crying at work was not something I planned for that day, but it happened anyway. I flipped to the last page of Paper Towns and couldn't stop the tears from falling from my eyes. Even re-reading this book, it managed to reach into my heart and tug parts of me I like to keep hidden.

The first time I read this book, it connected to me completely. I have never been happy with the city I live in and have been plotting to escape since childhood. At the time of reading this book, I was working hard in my senior year of high school so I could receive a great scholarship, and finally leave. Besides being hilarious, this book made me feel vindicated about my desperate need for escape.

The second time reading it, my connection changed. Because this time when I had read it, my life had taken a completely different route. My hard work got me a scholarship, but I still could not afford to go to a university in a different city. Two of the most important people in my life had walked out of it, and left serious damage in their wake. I had lost my desire to leave, because I could not even picture how it was possible anymore. I was in a completely different situation than I thought I would be just months before, and one that I was not happy with. I picked up Paper Towns, and it, once again, helped me with all the problems I was dealing with. This time around, the idea of people's judgements of you was at the forefront. I could completely understand the idea of being placed in an impossible box, a box other people created for you, a box I never wanted to be in, and one that people could not accept you stepping out of. There was a pivotal conversation in the book which gave me so much insight into what I was going through at the time. I finally felt like all my feelings were put into eloquent words spoken from a boy who had to face the same reality I did. We imagine people a certain way, but that's a distorted reality, and one that is imposed on us daily. I can't be who everyone wants me to be, but I can be myself. And if that isn't enough for certain people, then they aren't meant to be in my life. Tough thing to accept, and something I'm still coming to terms with.

The book itself was just fantastic. The only way to understand how amazing it is is to read it. The characters are realistic, hilarious, stunning in their truthfulness, and will become a part of you. John Green has a way of telling you your most broken thoughts, making you look at them squarely, and telling you how to handle them. This book had me crying of laughter, and smiling like crazy. It had me re-evaluating myself, and changed my out-look on life. If that isn't the sign of a fantastic book, I don't know what is.


I had to include a quote from the book because it is simply everything that I learned, felt, and realized from Paper Towns.
"It is easy to forget how full the world is of people, full to bursting, and each of them imaginable and constantly misimagined."
As a little bonus to the review, I made a mini-playlist. The book had me thinking about going on a road trip, so I made a playlist of the songs that make me think of those montage-driving moments (there's 48 songs, but here's only 19 (for my almost age!)). I linked the songs to YouTube so anyone can listen to them. The name of my playlist? Escape from the Paper Towns:


**There could be swear words or inappropriate images in the video. I didn't make them, so I don't know. :)

As a final note, I've included a picture of my senior yearbook. Why? Well, I just so happened to quote a line from Paper Towns, one that gives me hope even in those dark times. 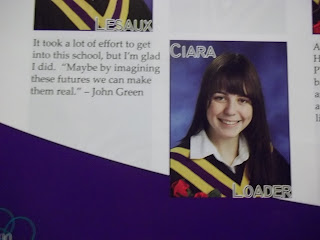