Review: The Statistical Probability of Love at First Sight by Jennifer E. Smith 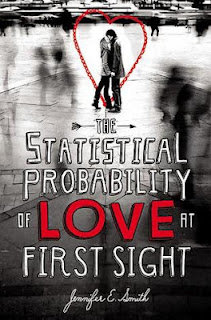 Who would have guessed that four minutes could change everything?

Today should be one of the worst days of seventeen-year-old Hadley Sullivan's life. She's stuck at JFK, late to her father's second wedding, which is taking place in London and involves a soon to be step-mother that Hadley's never even met. Then she meets the perfect boy in the airport's cramped waiting area. His name is Oliver, he's British, and he's in seat 18C. Hadley's in 18A.

Twists of fate and quirks of timing play out in this thoughtful novel about family connections, second chances and first loves. Set over a 24-hour-period, Hadley and Oliver's story will make you believe that true love finds you when you're least expecting it


I'm not the best when it comes to forgiveness.

I have a bit of a tendency to hold a grudge. Not my best personality trait, I'll admit, and one that has gotten me into trouble a few times recently. I do forgive, but it just takes me a bit longer than some people.

Why am I talking about forgiveness? Well, a book I thought would just be a cutesy, comedic novel turned into a journey to let go of anger, to embrace change, and maybe find your soul-mate.

I had been hearing amazing things about The Statistical Probability of Love at First Sight since its release in January. Everyone was calling it adorable and fantastic, so I knew I had to check it out. I started and finished it just the other day and, I have to say, it was just as great as everyone said it was.

At first, I wasn't a huge fan of Hadley. Mostly because of her unfortunate name. There was a boy named Hadley in my elementary school that used to chase me around, try to kiss me, and was one of the most obnoxious people I've ever had to deal with. Once I got past the association, I started to like her. I felt angry on her behalf when she spoke of her father's abandonment, and smiled to myself constantly during her banter with Oliver. And Oliver. Oh, I'm a sucker for a pretty boy with an accent. The mystery surrounding his return to London, and his constant humor had me flipping the page to read more. Hadley and Oliver's dialogue seemed very natural and endearing, and their relationship, although formed quickly, seemed solid and heart-warming.

The idea of forgiveness, something both Hadley and Oliver struggled with added an extra element to the story. It wasn't just about a chance meeting, and a romance that bloomed from it. It was two people suffering the consequences of other people's actions, and finding it in their heart to move on. It made me realize the mistakes of others don't have to define my own life, and that holding on to a grudge doesn't hurt anyone more than myself.

I will say, I found the writing slightly repetitive. Hadley often had the same internal monologue over and over, just with minor rephrasing. I understood the importance of it, but I think it was adequately covered the first few times. I also wasn't a huge fan of the third person writing. I felt it didn't fit the story at some points, but that's more of a personal preference.

Overall, The Statistical Probability of Love at First Sight was everything I hoped it would be, and more. Witty, fun, romantic, with just the right amount of heart, this book was great, and one I would recommend.