Review: The Unbecoming of Mara Dyer by Michelle Hodkin

My Rating: 4.5/5
Summary from Goodreads: 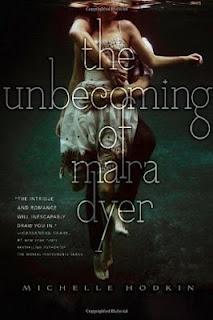 Mara Dyer believes life can't get any stranger than waking up in a hospital with no memory of how she got there.

It can.
She believes there must be more to the accident she can't remember that killed her friends and left her strangely unharmed.
There is.
She doesn't believe that after everything she's been through, she can fall in love.
She's wrong.


I've always been slightly afraid of mirrors. You know in horror movies were people look away from the mirror then look back and the knife-wielding axe-murderer whatever is standing behind them? Yeah, that has made me very scared of mirrors.

So has this book.

I was literally shaking when I read it, and kept ducking and hiding from mirrors for days afterwards! I'm sorry, but seeing dead friends in mirrors instead of yourself? Yeah, it was terrifying. It was probably not my best idea to stay up 'til two reading but I couldn't help myself! I needed to know what happened! A midnight read at its finest.

I was absolutely hooked from the first page. That letter! Wow! What a grab. Actually, I could say I was hooked from the cover cause, um, yeah, one of the best covers I've ever seen. One question I heard about the cover, which made me love it that much more, was "Is the boy on the cover saving her, or pulling her under?" Every time I look at the cover I can't help but shiver.

The story itself was shudder-inducing (in a good way). Watching the main character, Mara Dyer, slowly slip into madness was engrossing while terrifying. Her visions had me cowering from the pages, while flipping them faster to read more. The flashbacks of the incident, the constant nightmares, and Mara's attempt to survive it all kept the story moving, and kept my heart-pounding.

Mara Dyer is not your typical heroine, and I loved that about her. She's dark, haunted, and scary in her own right. She's a bit of a tragic heroine; one fatal flaw could bring her all down. Which is fantastic (in a literary sense. I'm sure it's not so fantastic for Mara). A lot of books have strong female leads that have you cheering and rooting for their success. The Unbecoming of Mara Dyer has a protagonist that has you staring in horror, yet fascinated by her every decision. I have to say, this series has a lot of potential. And the dark heroine of Mara is one to watch out for.

I have to also mention Noah Shaw. Although I found the beginning of their relationship slightly typical (by YA book standards), I adored him. I can't help but love a sarcastic hottie, with a sweet side. I mean really, who can!

I don't want to give away anything, so I'm going to put a big SPOILER ALERT right here (although, it's not really a huge spoiler, but if you don't want any, don't read this paragraph) but there was one thing that irked me about the book. I didn't like the supernatural element that was thrown in at the end. I liked the more contemporary, although a bit paranormal, style it was taking. But the end! Oh the end. Let's just say I NEED to have The Evolution of Mara Dyer in my hands...like yesterday.

If you're looking for a scary thrill-ride, pick up The Unbecoming of Mara Dyer. It'll have you cowering in a corner, while gluing your eyes to the page.

The cover of The Evolution of Mara Dyer was just released and my goodness is it gorgeous! As stunning and as deeply haunting as the first. Makes me wonder what's going to happen in the second book! 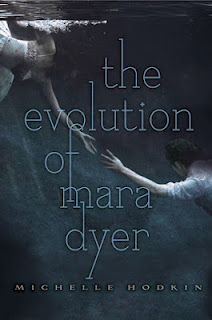 -Ciara who is lost at midnight
Posted by Ciara (Lost at Midnight) at 1:59 PM