Waiting On Wednesday is a weekly meme hosted by Jill over at Breaking the Spine, in which bloggers talk about the books they are most eager for!
This week's pick: Shine by Jeri Smith-Ready
Publisher: Simon Pulse
Release Date: May 1st, 2012 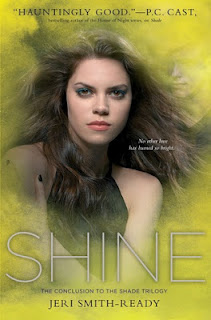 Life can change in an instant, and no one understands that better than Aura. It’s been almost a year since her boyfriend tragically died. She’s finally letting go of Logan’s violet-hued ghost, but not her search to uncover the truth about her past.
As the first in a generation that can see ghosts, Aura is convinced that she has a connection to the Shift. She’s trusted Zachary, ever patient and ever by her side, with all that she knows. But when the government threatens his life in an attempt to learn Aura’s secrets, she will stop at nothing to protect herself and the one she loves...even if that means betraying her own heart. (Summary from Jeri Smith-Ready's website)

Okay, it's time for me to gush like a crazy fan-girl, because I love everything about this series. The story, the characters, the writing, the concept, the author, and of course, the amazing group called Team Kilt all come together to make one of the best combinations in the world. I'm going to be terribly sad that this amazing series is coming to an end, but I know Shine is going to be one heck of a book.

The reason I first picked up Shade was because Jeri Smith-Ready was going to be at a signing I was attending later in the year (2010). I read Wicked Game, one of her adult novels, first and absolutely adored it (I knew I was going to love it when, on the first page, the main character clarified "It's KEER-ah, not see-AIR-ah"). I purchased Shade not long after, and loved it even more. Such an interesting and original concept. Such fantastic characters (the only books in which I can truly say I can't choose between the guys), and such a fantastic (Irish) author. Pick up this book! You will love it. Seriously, I kid not, you will LOVE IT. The entire trilogy will even be out in paperback for the May 1st release of Shine!


For fans of the series, make sure to check out KiltandKeeley.com, the Shade fansite which is always up to date with information! They're planning an exciting Team Kilt Con, which sounds amazing! Too bad I live in Canada making it a little difficult to attend.


Check out the Shine trailer below! Only a couple more weeks!

Find this book: Jeri Smith-Ready's wesbite | Amazon | Goodreads
Posted by Ciara (Lost at Midnight) at 12:00 AM

Email ThisBlogThis!Share to TwitterShare to FacebookShare to Pinterest
Labels: Jeri Smith-Ready, Shade series, So Much Awesome Sauce, Waiting On Wednesday, YA Reads