Review: My Soul to Save by Rachel Vincent 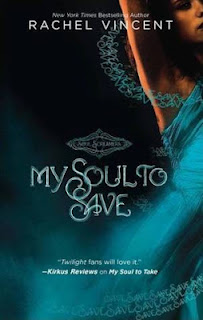 When Kaylee Cavanaugh screams, someone dies.

So when teen pop star Eden croaks onstage and Kaylee doesn’t wail, she knows something is dead wrong. She can’t cry for someone who has no soul.

The last thing Kaylee needs right now is to be skipping school, breaking her dad’s ironclad curfew and putting her too-hot-to-be-real boyfriend’s loyalty to the test. But starry-eyed teens are trading their souls: a flickering lifetime of fame and fortune in exchange for eternity in the Netherworld—a consequence they can’t possibly understand.
Kaylee can’t let that happen, even if trying to save their souls means putting her own at risk...

(Side note: I apologize for the lack of reviews here on the blog recently. I've been battling this very weird tiredness which has had me sleeping all day, or not being able to sleep at all. I'm also in the middle of exams so I'm trying to juggle studying and blogging and it's becoming difficult. Once I'm done exams (Nine days from now!) I will be back on track!)

I love to re-read books. I know a lot of people who never do, but I adore it. I find you notice so many more things the second (or third, or forth, etc.) time around than you do the first and it often really adds to the story. Characters are seen in a different light, actions take on entirely different meanings, and little hints are finally noticed. In the case of My Soul to Save, it made me like the characters AND the plot line that much more.

Now, I liked My Soul to Save the first time around, but it wasn't as amazing as My Soul to Take. I thought the plot was a bit out there, and I was still very frustrated with Kaylee. This time I have to say, I really saw where the plot was heading, and my respect for Kaylee was definitely more than previously. Since I don't want to give out any spoilers for future books, I can't really say what I noticed about the plot, just that it plays a role in the next few novels. One thing about the plot I was really excited to notice is the "greed" element. A little while back, Rachel Vincent wrote a blog post (WARNING: The post contains spoilers for the series) about how each book was based on a seven deadly sin. My Soul to Take was vanity, and My Soul to Save was greed. I could definitely see where Vincent took that idea, and how she threaded it through each characters story line. Really fun to read about!


I also have to say, I was really proud of Kaylee. My first time reading it, I was always aggravated by her decisions and just her personality in general. This time, I could see where she was coming from and although she didn't always make the smartest choices, she made them with the best of intentions.

I also loved getting to see Tod's flawed side. His sarcastic attitude and casual smirk took a backseat to his raw emotions in this book. I think it was fantastic to see a different side of him, and really added to his character.


Overall, My Soul to Save grabbed me, even reading it a second time. I was pulled into the fight to save Addison's soul, Kaylee's unrelenting courage to do just that, and all the emotion turmoil that this quest entailed. It was a ride, a heart-breaker, and just generally a fantastic book. Make sure to check out Rachel Vincent's Soul Screamer series, if you haven't already. Mythical creatures, heart-breaking characters, and kissing (lots of it) all wrapped up in one delicious series!


If it sounds good to you, why not make it even better and take part in the Soul Screamers Reading Challenge! It's a bit late into it, but it's very easy to catch up! These books will not let you go until you're finished!


Find this book: Amazon | Goodreads | Rachel Vincent's website
Posted by Ciara (Lost at Midnight) at 1:23 AM