Women of the Otherworld Challenge (2): Stolen 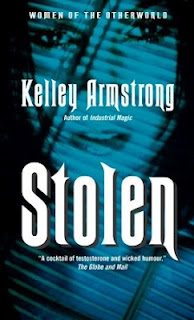 Even though she's the world's only female werewolf, Elena Michaels is just a regular girl at heart -- with larger than normal appetites. She sticks to three feasts a day, loves long runs in the moonlight, and has a lover who is unbelievable frustrating yet all the more sexy for his dark side. Like every regular girl, she certainly doesn't believe in witches. Then again, when two small, ridiculously feminine women manage to hurl her against a wall, and then save her from the hunters on her tail, Elena realizes that maybe there are more things in heaven and earth than she's dreamt of.

Vampires, demons, shamans, witches -- in Stolen they all exist, and they're all under attack. An obsessed tycoon with a sick curiosity is well on his way to amassing a private collection of supernaturals, and plans to harness their powers for himself -- even if it means killing them. For Elena, kidnapped and imprisoned deep underground, separated from her Pack, unable to tell her friends from her enemies, choosing the right allies is a matter of life and death. (Summary from Goodreads)

(Note: This is an ADULT book. I don't usually review adult books on the blog, but I'm making an exception solely for the Women of the Otherworld Challenge)

Man, these books are addicting. I know that I read them each in a day the first time around, but what I forgot was the pull these books have! Every time I put Stolen down I was drawn to pick it right back up again! I may have known what would happen next, but I was captivated nonetheless. Kelley Armstrong, you are one amazing author.

Stolen introduces readers to the real Otherworld, which is populated with much more than just werewolves. Witches, necromancers, half-demons, sorcerers, shamans, and even vampires all exist in this story, and it throws Elena and the Pack for a bit of a loop. I really liked that Armstrong added all these supernatural races to the mix, and enjoyed learning about them in this novel.

I remember being a bit disappointed with Stolen the first time I read it because there wasn't enough Clay (hey, what can I say, I love that Southern drawl!). This time, I really loved being able to learn more about Elena, and see her develop as a character. I enjoyed watching her stand up for herself, and keep her head together (for the most part) when in such an intense situation. I loved that she was calculating and strong, always looking for a way out of her peridcament instead of just accepting her fate. I felt myself being more passionately angry over what Elena was subjected through at the hands of these twisted scientists, and warped mogul. I just kept waiting for the tables to be turned on them, and hoped Elena would be the one to do it.

As I said earlier, I loved that Kelley Armstrong added in a whole range of other supernaturals, but I wasn't a huge fan of Paige the first time around. I found her to be very bossy and irritating and she just generally rubbed me the wrong way. My, how my view of her has changed because this time reading it, I adored her. Yes, she was still over-bearing and haughty but at the same time she was fierce and rebellious. I could see how strong and passionate she was about being a witch and doing the right thing, which made me really love her. I also happened to adore small and defiant Savannah, who despite being twelve, never seemed to back down.

Stolen was the amazing, action-packed follow-up that I had been hoping for and much more. I loved the new characters, passionately hated the villains, and had an awesome protagonist to root for. Another amazing installment in one of my all-time favorite series!

Find This Book: Amazon | The Book Depository | Goodreads | Kelley Armstrong's Website
Posted by Ciara (Lost at Midnight) at 12:00 AM