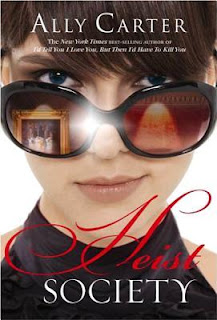 When Katarina Bishop was three, her parents took her on a trip to the Louvre…to case it. For her seventh birthday, Katarina and her Uncle Eddie traveled to Austria…to steal the crown jewels. When Kat turned fifteen, she planned a con of her own—scamming her way into the best boarding school in the country, determined to leave the family business behind. Unfortunately, leaving “the life” for a normal life proves harder than she’d expected.

Soon, Kat's friend and former co-conspirator, Hale, appears out of nowhere to bring Kat back into the world she tried so hard to escape. But he has a good reason: a powerful mobster has been robbed of his priceless art collection and wants to retrieve it. Only a master thief could have pulled this job, and Kat's father isn't just on the suspect list, he is the list. Caught between Interpol and a far more deadly enemy, Kat’s dad needs her help.

For Kat, there is only one solution: track down the paintings and steal them back. So what if it's a spectacularly impossible job? She's got two weeks, a teenage crew, and hopefully just enough talent to pull off the biggest heist in her family's history--and, with any luck, steal her life back along the way. (Summary from Goodreads)


Goodness gracious, this was an awesome book. I have heard amazingly good things about Ally Carter books, and picked up Heist Society on these recommendations. I kept putting off reading it, not for any real reason, and now I'm kicking myself for not reading it sooner! This was one of the most fun books I've ever read, not to mention it was hilarious.

A story about teenage art thieves. Well, I can't say I've ever read one until now. Heist Society follows Katerina Bishop as she re-enters the family business to save her wrongly-accused father. A very interesting and intelligent concept. Ally Carter obviously put a lot of work and thought into this novel. I mean, I wouldn't even know where to start when it comes to stealing a painting, let alone have a ridiculously complex plan to do just that! It was detailed, and intriguing and I absolutely loved it. I also adore the protagonist herself, Katerina Bishop. She was brilliant, sarcastic, strong, and capable and I loved her for it. She was determined to save her father and would stop at nothing to do it. My kind of gal! Throw in a couple of teenage trouble makers, some clever mobsters, and lots of priceless art and you have one crazy adventure!

Now, I think it's time for some swooning over Hale. Cause, my goodness that boy is full of amazingness. He is hilarious, so sweet, brilliant and a bit cocky but in the best way. I couldn't help but smile every time Hale was involved because he was just so much fun! And he sure had some very swoon-worthy moments. Him and Kat make a fantastic team, both in thievery and in personality. I'm really excited to see what mishaps they get into next.

I know this was a bit of a short review, but that's simply because I read it awhile ago. If I had written this review sooner (which I planned on but, you know, I was lazy) I could probably write an essay on it. It was just awesome. This is going to be one wicked series. And I'm very excited to dive right in.

Find This Book: Amazon | The Book Depository | Goodreads | Ally Carter's Website
Posted by Ciara (Lost at Midnight) at 12:00 AM