Today, I have author Nora Olsen on the blog to talk about the writing process, and how she found what works for her. Please welcome her to the blog!

“There are three rules for writing a novel. Unfortunately, no one knows what they are.” ― W. Somerset Maugham

That is even more true than it is funny.

There is so much advice out there on the best way to write. Everyone seems to have “writing rules” and they’re all contradictory. Probably the only thing I have learned about writing is that everyone is different and every writer has to figure out for herself what’s the best way for her to write.

One book on writing that made a big impression on me when I set out to become a professional/“for realz” writer was Telling Lies for Fun and Profit: A Manual for Fiction Writers. It’s by Lawrence Block, the legendary mystery writer, and if you can get past a lot of dated references to typewriters, it’s wildly entertaining, quite inspiring, and full of great tips. One of the things he talks about is getting his writing done first thing in the morning, and then he can feel virtuous all day because his job is done.

I thought that sounded great, so I decided I would also write first thing in the morning. Except that never happened. Somehow I would put it off, and end up doing it last thing at night, right before bed when I could procrastinate no longer. I felt like a failure, until I finally realized that I was a night owl. I decided to accept it instead of fighting it.

This whole narrative suggests that I write every day. But I actually don’t. That is another one of Block’s tips, and probably the most common bit of writing advice I hear: “Write every day.” “If you write a page a day, in a year you’ll have a novel.” So I strongly believed I should be writing every day.

It makes sense. You’re in the habit, you become disciplined, you’re more productive, you’re taking your craft seriously. Great. It all sounds great. Only, I could never do it.

By the time I had completed one novel-length manuscript and several short story manuscripts and had begun sending them out, I had also decided to accept the fact that I did not write every day. What I was doing—writing in intense spurts, and then taking some time off, and then going back to edit what I’d written—seemed to be basically working. So why was I beating myself up for failing to get with the program?

The truth is that writing every day does not work for me. Maybe I would be a better writer if I did it. Yeah, and maybe if I had a sparkly horn growing out of my forehead I’d be a unicorn! Neither of these things is likely to happen.

While I do think it’s a bad idea to “wait for inspiration” (because you could wait forever, and inspiration never finishes your stories, just starts them), I think it’s fine to write on-and-off, if you’re that kind of person. I know a lot of writers, and they all have different writing methods. The important thing is to find out what YOURS is.

One writing challenge that I really like is NaNoWriMo, which I have been participating in on-and-off (of course!) since 2004. It stands for National Novel Writing Month, and what it means is that every November thousands of nutty folks all over the planet try to write a 50,000-word novel. Some of them succeed, and some of them just have fun/agony trying. If you “win,” your prize is the satisfaction of having met your goal. I like getting a first draft of a novel so quickly, and I find it refreshing to banish my highly-critical inner editor for one month. The amazing secret many people learn from NaNoWriMo is that their hastily-written prose is not really any worse than their carefully-written prose. (After you take out the random sentences that say things like, “Oh no, why did I write that? Let’s say that never happened.” Because there is no deleting during NaNoWriMo, not when you need to keep your word count up.)

I have noticed an interesting change since I started doing NaNoWriMo. Initially professional writers really looked down their nose at NaNoWriMo, because overwhelmingly the participants are amateurs who are doing it for the thrill and sense of accomplishment. They just plain love to write. The vast majority of WriMos don’t wish to publish their novels. There’s no requirement to be “good” in NaNoWriMo and many WriMos love to brag to each other about how awful their novels are. But at this point so many people have published their NaNoWriMo novels, and so many professional writers (like Beth Revis) have decided to give NaNoWriMo a whirl, that NaNoWriMo is no longer the badge of shame it used to be. 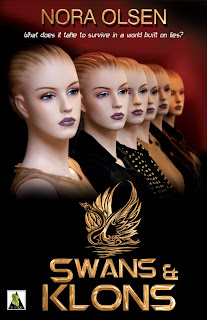 My most recent novel, Swans & Klons, was a NaNoWriMo novel. I had a hella lot of editing and cleaning up to do, but Swans & Klons is still recognizable to me as the thing I wrote in 2009.

Why do I bring this all up? Because some people hate NaNoWriMo. There are some people whose style is to write slowly and carefully and polish each sentence to gemlike perfection. They write two lines a day, and then cross one line out. And some of those people get a kick out of NaNoWriMo because it’s so different and it challenges them to get out of their comfort zone. But for others, doing NaNoWriMo is like being torn apart, it’s so painful for them.

So you know what? Those people shouldn’t do it. It’s not right for them. There’s no one way of writing that is good for everyone. We’re all different.

The only way to learn to write is by writing. Fast, slow, in the morning, at night, in a box, with a fox. Whatever. If what you’re doing isn’t working, try something new. But anything that is working is good!

Nora Olsen is the author of the YA novels Swans & Klons and  The End: Five Queer Kids Save The World. She grew up in New York City and received her B.A. in Classics from Brown University. Nora now lives in New York's Hudson Valley with her girlfriend and two adorable cats.


Thank you so much, Nora! I'm always happy to talk with fellow WriMos! What works writing-wise for you guys? Let me know in the comments!