Review: That Summer by Sarah Dessen 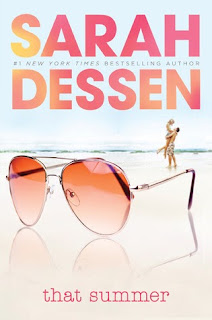 For fifteen-year-old Haven, life is changing too quickly. She's nearly six feet tall, her father is getting remarried, and her sister—the always perfect Ashley—is planning a wedding of her own. Haven wishes things could just go back to the way they were. Then an old boyfriend of Ashley's reenters the picture, and through him, Haven sees the past for what it really was, and comes to grips with the future. (Summary from Goodreads)

After years of hearing great things, a couple books bought, and lots of anticipation I finally read a Sarah Dessen novel. And you know what? It was awesome. It was the kind of book I think about a lot, and one that definitely fit the category “summer books”.

I will say, this book was not what I was expecting. I was thinking it was going to be one of those fun, light beach reads about summer romance and growing up. But it was so much more than that. It was less than two-hundred pages but had more depth than some series. I fell in love with this book during the first paragraph. The simple description of the possibilities of summer had me happy beyond belief. I adore summer. I love the heat, the sun, the hope and opportunities it brings. There pretty much isn’t a thing I don’t love about summer. So, that opening paragraph completely connected me with the story.

I really did enjoy reading about Haven coming into her own. Of her learning to accept herself and that people aren’t always as perfect as they seem. I’m a sucker for a coming-of-age story and although this book wasn’t exactly that, it had some elements of it. This book really explored the idea of perception. Of having a certain picture in your head only to find out later you had it completely wrong. I have been fascinated with this idea for a while now, so I loved getting a fresh take on it. It’s one of those life lessons everyone experiences differently, gradually, and that often shakes a person’s ideals.

I expected a love interest in That Summer but what I got was something better: Sumner Lee. He wasn’t a love interest, not really. He was more of a catalyst. He was a real person. I loved the way Haven described him as an outgoing, fun person. The kind of guy that makes things better just by being there. What I loved most about him though was that he wasn’t exactly what Haven thought he was. Getting to see both the idealized version created by Haven then the real version which is slowly revealed by Sumner added this extra layer to the story. And made me enjoy the book much more.

That Summer was also about family, and about accepting change when you’re not ready for it. The relationship between Haven and her sister Ashley was interesting to read about because it was far from perfect. We’re really put into the story and a point where they are not looking out for each other at all. They’re both completely wrapped up in their own little world and are making judgments of each other. I was mad at the way Haven was being treated. I can understand the feeling of being left out, of resisting change. I’m not the kind of person that deals with change well so I really related to Haven.

One funny thing (besides the cheese commercial which was hilarious) about the book was that its set back in the mid-90s. I mean, this book technically came out when I was three. It’s got a lot of old technology in it which had me giggling and reminiscing about the days of tape decks and boom boxes. It definitely didn’t detract from the story but, instead, gave it this endearing feel that made me smile.

Overall, That Summer was different than I expected but I think I liked it more because of it. It didn’t have my heart-racing from budding romance but, instead, had me thinking about growing up and the changes that life brings. One things for sure, I’ll be reading much more Sarah Dessen in the future!