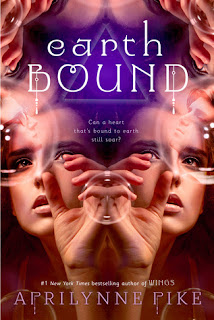 Tavia Michaels is the sole survivor of the plane crash that killed her parents. When she starts to see strange visions of a boy she’s never spoken with in real life, she begins to suspect that there’s much about her past that she isn’t being told.

Tavia immediately searches for answers, desperate to determine why she feels so drawn to a boy she hardly knows. But when Tavia discovers that the aunt and uncle who took her in after her parents' death may have actually been responsible for the plane crash that killed them--and that she may have been the true intended victim--she flees for the safety of Camden, Maine, where the boy she sees in her visions instructs her to go.

Now, Tavia is on the run with no one to trust. No one, that is, except for her best friend and longtime crush, Benson.

Tavia feels torn between the boy who mysteriously comes to her at night and the boy who has been by her side every step of the way. But what Tavia doesn't know is that the world is literally falling apart and that to save it she will have to unite with the boy in her visions. Only problem? To do so would mean rejecting Benson's love. And that's the one thing Tavia Michaels swore she'd never do.


I've been looking forward to reading Earthbound for awhile now, and was really excited when I got an ARC of it in a goodie bag! I've only read the first in the Wings series but I keep meaning to read more Aprilynne Pike and was happy to have the oppurtunity to check out her new series. Earthbound has one heck of an awesome concept and some cool characters!

The first few pages of this book had me completely captivated! Aprilynne Pike wrote a great and intriguing opening and I could not wait to unravel this mystery that was presented to me. After the initial interest though, I found myself getting a little confused. There were lots of events happen, lots of conclusions drawn, but there was no real explanation in between. I understand that some stuff is still a mystery to the narrator Tavia, but I feel like the "how" of the story was missing. The story would go from A to B with absolutely no explanation of how it got there. Tavia didn't have a lot of internal monologue showing how she came to certain conclusions and I thought her reactions to some events were unrealistic. She just didn't seem to be very shocked by a lot of the crazy stuff happening. Everything did get explained, and some of her reactions became justified but the confusion definitely brought me out of the story at points.

Despite my confusion, I found myself really interested in finding out what was happening. I wanted to see where the story was going to go, and see Tavia discover all the secrets that were hidden from her. There were so many mysteries and I wanted to unravel them all! When I finally did, wow. I mean wow! What an awesome and fresh concept. The idea itself was so original I was completely fascinated. I wanted to know more about it and cannot wait to see it further developed in the next book. The last fifty pages had me flipping ahead frantically cause I just needed to see what was going to happen! The very last scene was just superb and I am so insanely excited to read the next one. Now that I understand what's going on, this series is going to be crazy awesome!

As for Tavia, I had mixed feelings about her. I admired her determination, and her fight to discover the truth. She wanted to know what was going on and nothing and no one was going to stop her. I thought some of her reactions, though, were a bit unrealistic which kind of had me questioning her. Overall, I liked her and I'm excited to see how she evolves in the next installment! Then there's Benson. Oh man, Benson. Well, he was pretty awesome. A caring library nerd, I was into him from his first words. He was the kind of guy that Tavia needed: strong, supportive, and trusting. I kept getting frustrated with Tavia and her obsession with Quinn (who I personally was NOT a fan of) when she had such a great guy in front of her! Although, again, I didn't always find Benson's reactions believable (and I kind of understand why), I still really enjoyed his character.

In the end, I really did enjoy Earthbound. It has such a cool concept that I simply adore. It was a fun, addicting read and I can't wait for more of it!