Waiting On Wednesday (48): The Lost Sun by Tessa Gratton 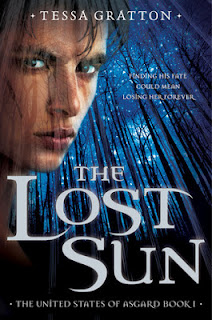 Seventeen-year-old Soren Bearskin is trying to escape the past. His father, a famed warrior, lost himself to the battle-frenzy and killed thirteen innocent people. Soren cannot deny that berserking is in his blood--the fevers, insomnia, and occasional feelings of uncontrollable rage haunt him. So he tries to remain calm and detached from everyone at Sanctus Sigurd's Academy. But that's hard to do when a popular, beautiful girl like Astrid Glyn tells Soren she dreams of him. That's not all Astrid dreams of--the daughter of a renowned prophetess, Astrid is coming into her own inherited abilities.

When Baldur, son of Odin and one of the most popular gods in the country, goes missing, Astrid sees where he is and convinces Soren to join her on a road trip that will take them to find not only a lost god, but also who they are beyond the legacy of their parents and everything they've been told they have to be.


Although I haven't read any books from Tessa Gratton in the past, when I heard about The Lost Sun I knew I had to read it. I usually ten to shy away from high fantasy (which it sounds to be a bit like) but I was just so intrigued by this summary! I really want to dive right into this new and interesting world and find more about Soren. I sense a lot more to this story, and I'm looking forward to seeing if I'm right.

I'll be keeping an eye out for The Lost Sun! I think it's one to watch!

Email ThisBlogThis!Share to TwitterShare to FacebookShare to Pinterest
Labels: Tessa Gratton, The United States of Asgard, Waiting On Wednesday