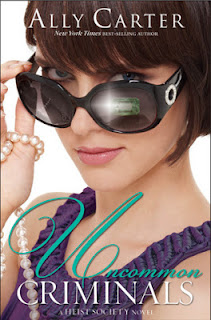 Katarina Bishop has worn a lot of labels in her short life. Friend. Niece. Daughter. Thief. But for the last two months she’s simply been known as the girl who ran the crew that robbed the greatest museum in the world. That’s why Kat isn’t surprised when she’s asked to steal the infamous Cleopatra Emerald so it can be returned to its rightful owners.

There are only three problems. First, the gem hasn’t been seen in public in thirty years. Second, since the fall of the Egyptian empire and the suicide of Cleopatra, no one who holds the emerald keeps it for long, and in Kat’s world, history almost always repeats itself. But it’s the third problem that makes Kat’s crew the most nervous and that is simply… the emerald is cursed.

Kat might be in way over her head, but she’s not going down without a fight. After all she has her best friend—the gorgeous Hale—and the rest of her crew with her as they chase the Cleopatra around the globe, dodging curses, realizing that the same tricks and cons her family has used for centuries are useless this time.

Which means, this time, Katarina Bishop is making up her own rules. (Summary from Goodreads)


Can I just say how awesome this series is? Two books in and I basically want to hug these books whenever I look at them. They bring me such joy! Uncommon Criminals was the perfect follow up to the mischeious Heist Society! Filled with heart, witty characters and just the right amount of daring, Uncommon Criminals was excellent!

I think I said this in my review of Heist Society, but I seriously love the concept of these books. I mean,  a band of misfit teenage art thieves stealing priceless pieces and returning them to their rightful owners? How is that not going to be a fantastic story! On top of an awesome concept, it's written by the fantastic Ally Carter! Really, what's not to love!

I don't think I've ever read about kids as crafty as these ones. This rag-tag group of thieves just makes me so, unabashedly happy. I love the dynamic between them all. The inside jokes they casually throw at each other, and the easy way they all interact. It's heart-warming and simply great reading material! They all have different and distinct personalities and all have their certain roles in each heist. Together, they are a force to be reckoned with and I cannot wait to read more about them!

The heist in Uncommon Criminals was so intriguing. The curse of the Cleopatra Emerald added a layer of mystery, and a bit of foreboding to the story. I had faith in Kat and the crew though, and adored watching them scheme and con their way through this difficult mystery. I particularly liked this case because of the family history behind it. We got to find out more about the mysterious Uncle Eddie, and the black spot on his history of heisting. It all built up to one fantastic conclusion that had me cheering out loud and declaring Katarina Bishop one heck of an awesome gal.

Kat herself was going through a bit of a growing period in the novel, and I loved getting that extra side of her. She was still her brilliant self, just maybe a little bit softer. I don't think a review of any Heist Society novel would be complete without a little Hale gushing. Hale is kind of ridiculously awesome. He never fails to make me smile, and make my heart all warm and fuzzy. He is charismatic, charming, and funny. I adore him to bits. His faith in Kat and their teamwork is one of the best parts in the book.

Ally Carter is such a smart writer. Cute, fun books often have just okay writing, but the writing in Uncommon Criminals is superb. Carter writes with talent and with intelligence. I never once questioned how this amazing group of kids could case and rob these highly secured places. It was all so realistic, so well thought-out, I couldn't help but be impressed. I loved all the quirky heist names, the on-going jokes, and the simple banter between the characters was fabulous. Ally Carter is purely and simply a great writer.

Overall, I loved Uncommon Criminals. I mean, how could I not! If you want a fun, addictive read get your hands on a Heist Society book!