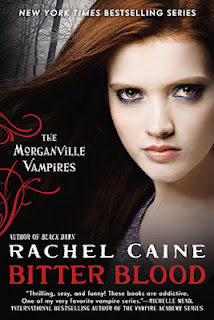 For years, the human and vampire residents of Morganville, Texas, have managed to co-exist in peace. But now that the threat to the vampires has been defeated, the human residents are learning that the gravest danger they face is the enemy within…

Thanks to the eradication of the parasitic creatures known as the draug, the vampires of Morganville have been freed of their usual constraints. With the vampires indulging their every whim, the town’s human population is determined to hold on to their lives by taking up arms. But college student Claire Danvers isn’t about to take sides, considering she has ties to both the humans and the vampires.

To make matters worse, a television show comes to Morganville looking for ghosts, just as vampire and human politics collide. Now, Claire and her friends have to figure out how to keep the peace without ending up on the nightly news… or worse. (Summary from Goodreads)

Is it weird that I kind of want to live in a town run by crazy vampires? Yes? Well, maybe. But Morganville, despite it's terrifying side, is awesome.

I've been reading this series for years and although it's at book 13, I've never gotten bored! I always put aside an afternoon when I start the Morganville books since I know I will never be able to stop once I crack open the cover! Every single book just adds more and more to this amazing series and I have loved them all. I've laughed out loud more times than I can count, shed my fair share of tears, and smiled so wide my cheeks hurt all because of this lovely town called Morganville.

I have yet to read Black Dawn, (mostly due to my limited funds and inability to take books out from the library) but I can't wait until I do and hopefully pick up Bitter Blood very soon after. If you haven't read any of the Morganville vampire books I HIGHLY recommend them. An awesome take on vampires, tons of amazing characters, and seriously awesome humor, there's so much to love. And now the first eight books are out in two-book anthologies! You get lots of Morganville awesomeness for a price that your wallet can appreciate. Seriously, check them out.