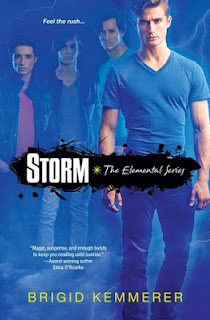 Becca Chandler is suddenly getting all the guys all the ones she doesn't want. Ever since her ex-boyfriend spread those lies about her. Then she saves Chris Merrick from a beating in the school parking lot. Chris is different. Way different: he can control water just like his brothers can control fire, wind, and earth. They're powerful. Dangerous. Marked for death.

And now that she knows the truth, so is Becca.

Secrets are hard to keep when your life's at stake. When Hunter, the mysterious new kid around school, turns up with a talent for being in the wrong place at the right time, Becca thinks she can trust him. But then Hunter goes head-to-head with Chris, and Becca wonders who's hiding the most dangerous truth of all.

The storm is coming. (Summary from Goodreads)

I picked up this book on the extremely high recommendations of basically half the Bloggers I know. EVERYONE was talking about this book, and it looked like just the book I was in the mood for. Hot boys, fast-paced plot, and an intriguing storyline? Yeah, that sounds like an awesome combination. And it most definitely lived up to my every expectation!

I think I want to marry one of the Merrick brothers, because not only are they gorgeous they are a ton of fun. Chris, who alternately narrates the story, is so sweet. He wants to fit in with his brothers, instead of just being the youngest. There was definitely some swoon worthy moments between him and Becca, and I loved his passion and courage. Speaking of Becca, she was just fantastic. I was livid over what she had been subjected to at the hands of her ex and how the people at her high school treated her. It was absolutely awful, but Becca handled it with admirable strength. She was very fierce and loveable and a great protagonist. Jumping back to the Merrick brothers, the dynamic between the brothers evolved throughout the novel which was great to read about. There was lots of tension, power struggles but also complete love for one another. I adore those guys. I just want more of them! I had mixed feelings about Hunter, the third party in the love triangle. At first, I was such a fan! But as the story progressed I started getting annoyed and frustrated with him. By the end, I liked him, but I was definitely on Team Chris!

I think, even though I love the characters in this novel, my favourite part of the book was the concept. I have always said if I could have a super power I would either want to control energy itself or the elements. Seriously, those are the most EPIC super powers to have! I have read stories that feature the elements (not necessarily with people that actually control them), but I loved that Brigid Kemmerer put a new spin on it. The idea that everyone is connected to the elements to an extent but that some fall on the exact “point” of the element was really interesting! I don’t think I’ve heard anything like it. I enjoyed seeing the different things the boys could do with their powers, and seeing how connected they are with their element. I loved reading from Chris’ perspective but it’ll be interesting to see how each of the brothers deals with their gift.

This book captured me from the start. It is a fantastic example of urban fantasy in the YA genre, and I just want MORE of it! Storm was a kick-butt story, with fantastic characters, and just the right amount of suspense. I actually think everyone can enjoy this story. It is a great, great novel.

Find This Book: Amazon | The Book Depository | Goodreads | Brigid Kemmerer's Website
Posted by Ciara (Lost at Midnight) at 12:00 AM