Review: Masque of the Red Death by Bethany Griffin 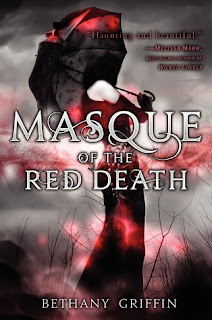 Everything is in ruins.

A devastating plague has decimated the population. And those who are left live in fear of catching it as the city crumbles to pieces around them.

So what does Araby Worth have to live for?

Nights in the Debauchery Club, beautiful dresses, glittery make-up . . . and tantalizing ways to forget it all.

But in the depths of the club—in the depths of her own despair—Araby will find more than oblivion. She will find Will, the terribly handsome proprietor of the club. And Elliott, the wickedly smart aristocrat. Neither boy is what he seems. Both have secrets. Everyone does.

And Araby may find something not just to live for, but to fight for—no matter what it costs her. (Summary from Goodreads)


Gothic horror is not a genre I usually dabble in. There isn't too much out there, that I know of at least, and the horror genre in general makes me wary. When I first heard about Masque of the Red Death I was intrigued. It had a very interesting concept, some Gothic elements thrown in, and a stunningly gorgeous cover. I knew I had to read it. And I'm very glad I did.

To start off, I love broken characters. I might even love them more than kick-ass heroines. Broken characters are utterly complex and interesting. They have things to overcome, which makes their (hopefully) eventual triumph that much sweeter. And broken characters are so real. They have heart, they have weakness, but they also manage to find hope in the darkest places. So, I loved Araby from the start. A guilt-stricken girl seeking oblivion through drugs and dress-up, Araby grabbed me from her first words. My heart broke for her and I wanted desperately for her to simply forgive. But she wasn't the only distraught character. It seemed that every person in this novel had a secret or two, many of which defined their whole lives. This wasn't a very happy novel, but desperate and dreary, each character barely clinging to life and knowing that every moment could mean their death. A horrific situation that made one heck of a plot. And some very interesting relationships.

Normally, when love triangles are involved, I can choose a guy. Very easily no less. And, although I'm not a huge fan of love triangles, this one kept me intrigued for the simple fact that I couldn't choose. At first, the tattooed and surprisingly sweet Will was a clear favorite. He was the kind of character I just instantly fall for. But then Elliot came along and surprised me. At first, I was not a huge fan. He was arrogant and forceful, which I absolutely can't stand. But soon, he started growing on me. The arrogance turned to pain and the forceful attitude turned loving. And by the end, choosing between them was impossible. They were both great characters, and swoon-worthy crushes.

The story was really bleak. But also so interesting. The setting was kind of a mix of all different places and periods, and the steampunk element was so well done. I totally wish I got to walk around in a crazy ripped corset dress all day. Although, if I had to wear a mask and deal with an awful plague, I would pass. Because wow, what a terrible and disturbing disease these characters had to face. I was sickened and disturbed about how terrible the world, and the people, had become in Masque of Red Death. The Weeping Illness, and the Red Death, killing so many, the terrible dictatorship the city was under, and the hope that everyone had lost in living. But not all hope was gone, and that's something I loved. The novel could pull you down, but there was always just that little niggling of hope. The fight that still hadn't gone out of some characters, despite the situation they faced. Up-lifting, and something I couldn't help but cheer for.

The author seemed to use a minimalist style when it came to the writing. Which isn't an negative, since I've often found myself loving those kinds of books. The problem I had was the minimalist writing led to some disjointed scenes. I found myself confused about how one scene bleed into the other, and how characters came to certain choices and conclusions. Araby was well developed because of the internal monologue in the novel, and the boys Elliot and Will as well because of their interactions with her. But I found other side characters, especially April, to be confusing. I liked her, but I couldn't put my finger down on what time of personality she really was. I have a feeling though that the kinks I wasn't such a fan of will all be cleared up in the second book.

Find this book: Amazon | Goodreads | Bethany Griffin's Website
Posted by Ciara (Lost at Midnight) at 12:00 AM