Waiting On Wednesday (79): Take The Fall by Emily Hainsworth 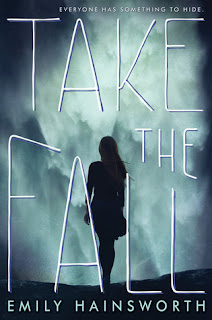 Fear grips the residents of Hidden Falls the night Sonia Feldman and her best friend, Gretchen Meyer, are attacked in the woods. Sonia was lucky to escape with her life, but Gretchen’s body is discovered at the bottom of a waterfall. Beautiful, popular, and seemingly untouchable, Gretchen can’t be gone. Even as Sonia struggles with guilt and confusion over having survived, the whole town is looking to her for information…could she have seen something that will lead the police to the killer?

At the top of the list of suspects is Gretchen’s ex-boyfriend—and Sonia’s longtime enemy—Marcus Perez. So when Marcus comes to Sonia for help clearing his name, she agrees, hoping to find evidence the police need to prove he’s the killer. But as Gretchen’s many secrets emerge and the suspects add up, Sonia feels less sure of Marcus’s involvement, and more afraid for herself. Could Marcus, the artist, the screwup, the boy she might be falling for have attacked her? Killed her best friend? And if it wasn’t him in the woods that night…who could it have been? (Summary from Goodreads)

I'm loving all the mystery/thriller books that have been coming out recently! It's one of those genres I always thought was lacking in YA and I'm excited to see it expanding. Although I have yet to read Through to You, I know Emily Hainsworth is going to be an author I adore. I'm really excited to grab a copy of Take the Fall when it comes out in February!

Email ThisBlogThis!Share to TwitterShare to FacebookShare to Pinterest
Labels: Waiting On Wednesday