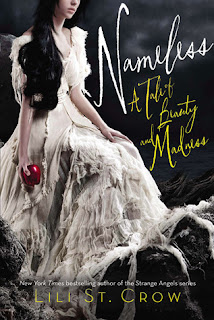 When Camille was six years old, she was discovered alone in the snow by Enrico Vultusino, godfather of the Seven—the powerful Families that rule magic-ridden New Haven. Papa Vultusino adopted the mute, scarred child, naming her after his dead wife and raising her in luxury on Haven Hill alongside his own son, Nico.

Now Cami is turning sixteen. She’s no longer mute, though she keeps her faded scars hidden under her school uniform, and though she opens up only to her two best friends, Ruby and Ellie, and to Nico, who has become more than a brother to her. But even though Cami is a pampered Vultusino heiress, she knows that she is not really Family. Unlike them, she is a mortal with a past that lies buried in trauma. And it’s not until she meets the mysterious Tor, who reveals scars of his own, that Cami begins to uncover the secrets of her birth…to find out where she comes from and why her past is threatening her now.


When I read a Lili St. Crow book, I expect a few things. Things like a new and original concept, interesting and complex characters, and a story that is going to have me desperate to know what happens next. Nameless had all of that in spades.

There have been a lot of re-tellings in the YA genre recently, but Nameless surpasses most in pure creativity. There are jacks and Twists and charms and Potential, and a whole number of other things in this crazy world. At first, it was a bit overwhelming. The reader is thrown head first into this brand new world with no explanation. For the first few chapters I was trying to figure out just what the heck was going on. After some much needed back story though, I found myself immersed in this world and able to follow along with the lingo. And my goodness, was I into this book. I could not wait to figure out what was happening and found myself flipping pages like a madwoman. This world was so intriguing and complex, I wanted to unravel all the different layers. I was also so invested in the characters, I just wanted to make sure they got their happy ending!

Cami, though, I went back and forth with. At the beginning, I adored her. She was quiet, but strong, a girl not really in her element but trying hard to make it her own. Her relationship with Nico, which I'll gush about later, was both heart-warming and heart-wrenching. As the novel progressed though, I found her to be a bit lacking. I expected a lot from her, and I wasn't entirely sold on how she handled the last half of the book. The last few scenes had me smiling again, and I have hope that she'll be awesome in the next books. Tor, on the other hand, I could not stand. I know, he's supposed to be mysterious and likable. But, to me, he was simply irritating and irrational. Eventually, he came around, but I still could not shake my initial dislike of him.

And now onto the love interest. Oh, dear Nico. Now HERE is a couple that was giving me feels left and right. They were so compatible, so caring of one another. They just seemed to match. Cami with her quiet perseverance was the perfect balance for Nico's quick temper. They knew how to help each other, calm each other, and work together. Every time they had a scene together, my heart was give off these little squeezes. I cannot wait for more of them!

Although Lili St. Crow re-imagined this classic tale and made it all her own, it was still really cool to notice all those subtle hints of Snow White in Nameless. And Snow White wasn't the only fairy tale represented in this novel. There are hints of many others woven into the story, and I'm very excited to see if they're explored more in detail in the next two books!

Nameless was exactly what I was hoping it would be: imaginative, consuming, and heart-pounding. I am desperately awaiting the next installment in this brilliant new trilogy!