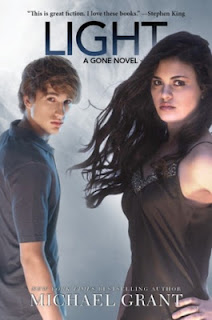 It's been over a year since all the adults disappeared. Gone.

In the time since every person over the age of fourteen disap-peared from the town of Perdido Beach, California, countless battles have been fought: battles against hunger and lies and plague, and epic battles of good against evil. And now, the gaiaphage has been reborn as Diana's malicious mutant daughter, Gaia. Gaia is endlessly hungry for destruction. She yearns to conquer her Nemesis, Little Pete, and then bend the entire world to her warped will. As long-standing enemies become allies, secrets are revealed and unexpected sacrifices are made. Will their attempts to save themselves and one another matter in the end, or will the kids of Perdido Beach perish in this final power struggle?

Light, the sixth and final book in the New York Times bestselling Gone series by Michael Grant, creates a masterful, arresting conclusion to life in the FAYZ.


I've been reading the Gone series since the start, and each book it just gets better and better. It terrifies me to my bones, destroys my heart, and keeps me on my toes. It's edge-of-your-seat action with characters that will soon become friends. I'm still shocked that it's all coming to an end, and know it will not be picture perfect. It'll be gritty and raw, painful and powerful, what I've come to expect from Michael Grant. Although I can't wait for it to be in my hands, I know I'm going to be so so sad to see it end. Check this series out. You really need to.