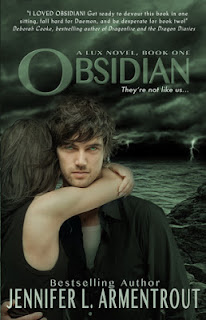 When we moved to West Virginia right before my senior year, I'd pretty much resigned myself to thick accents, dodgy internet access, and a whole lot of boring.... until I spotted my hot neighbor, with his looming height and eerie green eyes. Things were looking up.

And then he opened his mouth.

Daemon is infuriating. Arrogant. Stab-worthy. We do not get along. At all. But when a stranger attacks me and Daemon literally freezes time with a wave of his hand, well, something...unexpected happens.

The hot alien living next door marks me.

You heard me. Alien. Turns out Daemon and his sister have a galaxy of enemies wanting to steal their abilities, and Daemon's touch has me lit up like the Vegas Strip. The only way I'm getting out of this alive is by sticking close to Daemon until my alien mojo fades.

If I don't kill him first, that is.


Oh, man. I resisted this book for so long but I was no match for it. I was sucked in from the start and soon found myself frantically flipping pages to get to the end. I was told this book would be addicting but I didn't get it until I was at work wonder what Daemon and Katy were up to and decided to sneak in a few pages during the downtime. Obsidian pulled me under and I don't think I'll ever find my way out.

I have to give Jennifer L. Armentrout her kudos. She wrote not only a highly addicting book but created a ridiculously creative concept. You don't see a lot of alien books in YA, but I would totally love lots more! I was hooked for page one and I couldn't wait to figure everything out. I was completely immersed in the story line and nothing could get it out of my head. I adored the idea, was falling pretty hard for the characters, and found the dialogue to be superb.

Katy was such an awesome protagonist. I loved her quick wit, and that she never backed down. She wasn't going to let people walk all over her, and she always had something to say. Her little quips had me in stitches and wanting to give her a high-five. She was the perfect person for this story and narrator I couldn't get enough of. And then there was Daemon. My emotions for this boy were all over the place. On one hand, I was ready to punch him clear across the face for being such a mean guy. But, there were moments when I was practically melting from his swoon-worthy-ness. I knew that all the jabs and barbs he threw out had reason behind them. I wanted to find out more and to see what was behind the egotistical, angry Daemon Black. The tension and banter between him and Katy was captivating and adorable. I loved that they were able to just trade hilarious insults back and forth. As much as they both tried to deny it, their chemistry was undeniable.

And this is the part of the review in which I confuse you. Because there were a bunch of things I didn't like. Katy's narration was awesome. She is a firecracker with tons of sarcasm and hilarity. As I said, the dialogue was awesome but I had a lot of issues with the description and the writing as a whole. It needed some work, and brought me out of the story at parts. There were also a few minor plot holes that had me going "wait a second" and messed with the flow of the book. Another part that had me head-desking was Katy constantly calling Daemon some variation of "jerk". I get it. He's a jerk. I'm reading the dialogue too. I get that you two don't get along but is it necessary for you to tell me every other page? No, it really isn't. It was getting very repetitive and frustrating. I know it's a part of the story and character development but it was overdone. I also felt parts of Katy's personality were forced. There would be little bits of it thrown in randomly, then never mentioned again. I felt like there were just thrown in there to appeal to the audience when, really, they had nothing to do with her. Just like her "progression". Katy kept talking about become this "new" person, but she was the same the entire book. Her apparently change in personality was simply talked about, never really shown, which didn't make it believable. It was just another part thrown in there to appeal to the audience. Also, the end scene had me thrown for a loop. It felt like everything got turned on it's head for no apparent reason.

Overall, Obsidian was exactly what everyone said it would be: insanely addicting. I literally went out an bought Oynx midway through reading and have already devoured it. Although the series had some low points for me, I really enjoyed it. These characters are so great, and this concept is awesome. You can't go wrong with aliens!