Review: One Night That Changes Everything by Lauren Barnholdt 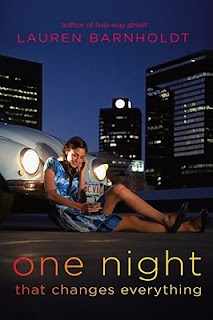 A hilarious and sweet teen novel by Lauren Barnholdt, the author of two-way street.

Two years ago, when Eliza Sellman was in ninth grade, her dad found out he was being transfered and the family was going to move. Having always been shy and not so confident about her body, Eliza took that opportunity to start a list in her private notebook of all the things she planned on doing when she moved but had always been afraid to--like wearing a miniskirt and asking guys to dance; singing karaoke in front of strangers; posting a photo of herself on her Facebook wall in a bikini...you get the idea. New town, new Eliza, right? Well, she'll never know because the transfer fell through and they didn't move. But Eliza kept adding her goals and secret fears to the list in the notebook. Now it's two years later, and in that time Eliza has had and lost her first boyfriend. But this was more than your average breakup...turns out the sweet and cute Cooper was only dating her as a hazing stunt by a secret society. Eliza got her revenge by posting some pretty nasty (and only sort-of true) stuff about Cooper online. That posting has had major consequences and now Cooper and his buddies have stolen her private notebook and won't give it back until she performs all the things on her list in one night. It's torture...until Eliza steals something from the boys she knows they'll want to trade her notebook for. What starts out as a night of humiliation turns into a night of revelations as Eliza learns what Cooper was really thinking when they dated, the real reason he's stolen her notebook, and how freeing--and life-changing--it can be to do the things you fear the most.


Okay, I had absolutely no idea what I was getting into with this book. My awesome blogger friend Katie lent me two Lauren Barnholdt books and declared that I had to read them because they were amazing. I figured if she was giving them such high praise, I would enjoy them as well. I decided to pick up One Night That Changes Everything first because I loved the idea and my goodness was I shocked. I didn't just enjoy it, I absolutely freakin' LOVED it. It made me immediately read the other book Katie lent me (Watch Me) and go out an buy another Lauren Barnholdt book because I adored it so much. One Night That Changes Everything rocketed Lauren Barnholdt onto my "awesome authors" list with a bang.

I'm usually not a fan of books that happen solely in the span of a night. Now, that's not the say that I will dislike the book because it has that element, but it's one that has to be done well for me to enjoy it. Lauren Barnholdt did superbly. Having Eliza (who I will gush my love for soon enough), her two crazy friends, and maybe-not-so-evil-ex-boyfriend run around Boston for one crazy night was perfect. It was the right story for the one-day plot line and kept me completely captivated for the whole story. And the plot itself was just so much fun! Watching Eliza face some of her greatest fears was heart-warming and so cute. And Eliza herself was such a delight. I loved her narration, her fierce little heart, and her stubborn attitude. She rambled on nervously, freaked out at points, and was completely and totally her hilarious self. She had to do somethings that terrified her but she fought through and kept her wits about her. Eliza was simply epic. Her friends, each with their hilarious quirks had me in stitches. And my heart my have done a few little squeezes when a certain boy was in the picture. Actually, my heart was doing all kinds of things during this book! I was so into it, I was having my own freakouts!

I think one of the best things about this novel is the writing. It was absolutely hilarious! I was laughing out loud, had a smile constantly on my face and basically wanted Eliza to be my bff. The writing was also really realistic, and made me really connected to the characters and the story. I could picture Eliza perfectly, and I felt like I knew her so well! The writing was just so smart and fun I couldn't get enough of it.

In short: One Night That Changes Everything was spectacular. I adored everything about it and have now placed Lauren Barnholdt at the top of my "must read" list!