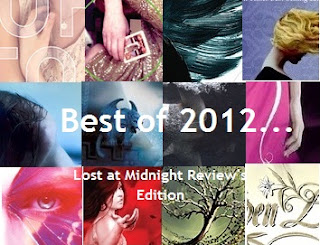 (Sorry this list is late but they're taking me a heck of a lot longer than I thought they would!)

Maybe I should just rename this list "swoon-worthy boys" cause that's pretty much what this list consists of. I'm bringing out my inner fan-girl here and talking about all the gorgeous boys our awesome heroines (and me!) have fallen head over heels for. Each of these guys have their own special something but they are all amazing love interests in their own right.

Sam Henry, what a sweetie. I had to mention him because he did something that hasn't happened....ever. He made me choose the best friend. I always, always pick the love interest over the best friend. They never stand a chance in my heart. But Sam Henry was different because I chose him, the best friend, from the start. He was adorable, funny, and just a genuinely good guy! Perfect for Jordan, and I kept hoping she would realize that. So, Sam Henry, you broke my streak and you should be very proud!

10. Archer Cross
The Hex Hall Series by Rachel Hawkins (Read in 2012: Hex Hall, Demonglass, Spell Bound)
A bad boy warlock with a tarnished heart of gold. What's not to love? Archer was just such a fun and heart-warming character. A troubled past but I determination to do what's right, Archer was a spectacular love interest. His banter and chemistry with Sophie was such a treat to read, and they made a fantastic couple. I already miss reading about Archer and I hope to hear more about him in the Hex Hall spin-off. Archer was the first boy I read about this year, and he's a swoon-worthy as they come. So happy to have him on my list.


9. Shane Collins
The Morganville Vampires Series by Rachel Caine (Read in 2012: Last Breath, Black Dawn)
Shane Collins has been making me swoon for twelve books and he shows to signs of stopping. He's got a very tough exterior but it's his sweet side that can get me all teary. There was a certain scene that shall remain nameless in Last Breath that had me weeping and had my Shane-love at an all time high. And considering how much I've always loved Shane Collins, that saying something. He is hilariously sarcastic, intensely strong and constantly fighting for the ones he loves. There is nothing I don't love about Shane.

8. Kaidan Rowe
Sweet Trilogy by Wendy Higgins (Read in 2012: Sweet Evil)
Hello, Kaidan Rowe and your sexy British accent. Not only is he an accented musician (which is my weakness) he's basically a walking lust machine. And I totally understand why all the girls fall all over him. He's stunning, flirtatious, charismatic and charming. A deadly combination. But there's a lot more to Kaidan than meets the eye. His home life has greatly affected him, and he put walls up to make sure nothing else does. Although, sweet little Anna seems to be breaking down those walls. The two of them on that road trip together pretty much made me feel every emotion possible. And watching Kaidan's wall break down a little was made my heart squeeze. I can't wait to read more about him, because he's the type of love interest that just keeps getting better and more intriguing.

7. Noah Shaw
Mara Dyer Trilogy by Michelle Hodkin (Read in 2012: The Evolution of Mara Dyer)
Can you tell I have a thing for accents? Actually, really, who doesn't have a thing for accents? I wasn't a huge Noah fan during the first novel *hides from Noah fangirls*. I had seen glimpses behind his mask, but I wasn't sure if they were genuine or not. Then, in Evolution I finally saw what I had been looking for. There was so much depth and devotion behind his cocky attitude. He stunned me at moments, and his fierce protectiveness for Mara was moving. He and Mara were two broken pieces of a distorted puzzle, but they were exactly what they needed. Noah isn't a typical YA boy like I thought, and I love him for the guy he really is.
6. Logan Quinn
The Mythos Academy Series by Jennifer Estep (Read in 2012: Touch of Frost, Kiss of Frost, Dark Frost, Crimson Frost)
I'll say this up front: every time Logan says "Gypsy girl" my heart squeezes a little. The way Gwen and Logan interact with each other plasters a constant smile on my face. They're opposite in so many ways, but that makes them perfect for each other. Logan himself is dashing and charming and the kind of guy I would want in my corner (both for his fighting skills and his loyalty). Watching his progression, and his revelations have just made me love him more. I need Midnight Frost already, because Logan is a love interest I can't live without.
5. Zachary Moore
Shine Trilogy by Jeri Smith-Ready (Read in 2012: Shine)
Oh, my kilt-wearing Scotsman. How I love you so. If the accent (again with the accents!)  wasn't enough to win you over, his personality is. His loyalty to Aura, his fierce will to do what's right and find out the truth, and that sweet softer side to him all added up into this beautiful character. Aura and Zachary were this tremendous force of good (which sounds odd but makes sense if you've read it) and I was so proud of what they were doing. Shine saw them having to work through some very personal issues, but they did it with love and care and it only seemed to make them stronger. I already miss Zachary because he was not only a great love interest but a phenomenal person.

4. Will Herondale
The Infernal Devices Trilogy (Read in 2012: Clockwork Prince)
When I read Clockwork Angel I liked will. He felt a bit too similar to Jace though, and I was waiting to see if he would be his own character. And boy, did he do that in Clockwork Prince. My hear could barely handle what he put it through. I was in serious pain during this book because Will was just so amazing and he was going through hell. He was completely different from what I thought of him originally, and his out pouring of emotion was stunning. Will, you stole my heart. Seriously, he was so brave and selfless I just want to squeeze him. I have a feeling his just going to rip my heart wide open when the trilogy ends! (P.S. I am Team I Can't Choose for this series, but because a certain something that happened in CP I had to put Will on this list as opposed to Jem)

3. Tobias "Four" Eaton
Divergent Trilogy by Veronica Roth (Read in 2012: Insurgent)
Four, what a guy. I mean really, he is just so darn spectacular. A fighter, a lover, a broken young man, Four is all of this and so much more. The things he did for Tris, the bravery he showed had me hugging the book. And his romantic, sweet moments had me swooning. The thing I loved most about his relationship with Tris was how completely realistic it was. It wasn't always perfect. They fought, they disagreed, they weren't always all over each other, they were just two people who loved each other despite their faults. Four is a fantastic love interest both for the person he is and for the relationship he has with the gal he loves.


2. Tod Hudson
Soul Screamers Series by Rachel Vincent (Read in 2012: Before I Wake)
I have been on Team Tod for Afterlife since he jumped onto the page in My Soul to Take. He was always my favorite, even before I considered him to be a love interest for Kaylee. His humor makes my cheeks hurt from smiling so much. He's not a perfect character, but he's a selfless one. Everything he does seems to be for other people and he was such a rock for Kaylee in Before I Wake. Tod and Kaylee just work because they have trust and faith in each other. And Tod himself is just such a strong, solid, sweetie. And I love him for it. Tod Hudson: stealing hearts and taking names since 2009.

1. Adrian Ivashkov
Bloodlines Series by Richelle Mead (Read in 2012: The Golden Lily)
If any of you have read The Golden Lily, you'll know exactly why Adrian is at the top of this list. If you haven't read TGL you should stop reading this and RUN to the bookstore and buy it. Seriously. Go now. It's common knowledge (well, for people who talk to me) that I'm a die hard Team Dimitri fan. I still stand by that, but Adrian has completely won me over in the Bloodlines series. He has always been a beautiful broken character, but watching him try and fix himself has been so utterly amazing. There's so many different layers to him. The sarcastic charmer, the pretty boy slacker, the shattered soul, and the good loving person he truly is. I don't want to give any spoilers, but seriously. Some of the thing he did in Bloodlines were so gosh-darn amazing. His relationship (well, friendship) with Sydney was adorable. Her with her ordered world and strict beliefs, and him with his broken heart and wiry intelligence. They're an unlikely yet perfect match. I just hope they can figure it out soon enough!

So...basically I love accented, sarcastic, layered, broken love interests. Well, that's nothing new. What about you?

Email ThisBlogThis!Share to TwitterShare to FacebookShare to Pinterest
Labels: Best of 2012