Waiting On Wednesday (32): The Indigo Spell by Richelle Mead


*Summary has minor plot spoilers for the previous Bloodlines novels* 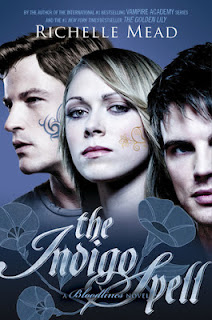 In the aftermath of a forbidden moment that rocked Sydney to her core, she finds herself struggling to draw the line between her Alchemist teachings and what her heart is urging her to do. Then she meets alluring, rebellious Marcus Finch--a former Alchemist who escaped against all odds, and is now on the run. Marcus wants to teach Sydney the secrets he claims the Alchemists are hiding from her. But as he pushes her to rebel against the people who raised her, Sydney finds that breaking free is harder than she thought. There is an old and mysterious magic rooted deeply within her. And as she searches for an evil magic user targeting powerful young witches, she realizes that her only hope is to embrace her magical blood--or else she might be next.


Populated with new faces as well as familiar ones, the Bloodlines series explores all the friendship, romance, battles, and betrayals that made the #1 New York Times bestselling Vampire Academy series so addictive—this time in a part-vampire, part-human setting where the stakes are even higher and everyone’s out for blood. (Summary from Goodreads)


It's hard to describe exactly how much I NEED this book. If you've read the end of The Golden Lily you will understand why. This series has brilliantly developed and loveable characters, and the plot is just so intriguing! There's tons of different levels and complexities to the story, and I love the world in which it's set.

I've been a Richelle Mead fan since I was fifteen, and have been obsessed about her series ever since (including her adult ones. Seth Mortensen? *SWOONS*). Bloodlines is no exception. I adored The Golden Lily (check out my review here) and I've been desperate to get The Indigo Spell ever since. Seriously, every time I think about The Indigo Spell I get all giddy and excited and feel like jumping. And although I'm beyond excited, I'm also petrified. Every third book in a Richelle Mead series is a game-changer, and usually a heart-breaker. Which means The Indigo Spell is going to make me cry. A lot. I'm going to be so emotionally drained after read it, but I cannot wait. I'll be there as soon as the book store opens, and will likely read it all day long!

I highly, HIGHLY recommend any Richelle Mead books and if you haven't read them, you need to get on that! (My advice: read Vampire Academy first. Bloodlines will spoil the ending of the VA series)