Review: Once Every Never by Lesley Livingston 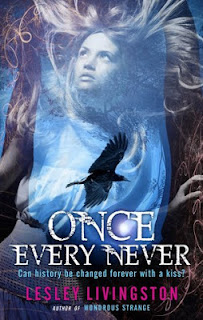 Clarinet Reid is a pretty typical teenager. On the surface. She's smart, but a bit of a slacker; outgoing, but just a little insecure; not exactly a mischief-maker, but trouble tends to find her wherever she goes. Also? She unwittingly carries a centuries-old Druid Blood Curse running through her veins.

Now, with a single thoughtless act, what started off as the Summer Vacation in Dullsville suddenly spirals into a deadly race to find a stolen artifact, avert an explosive catastrophe, save a Celtic warrior princess, right a dreadful wrong that happened centuries before Clare was even born, and if there's still time literally maybe even get a date.

This is the kind of adventure that happens to a girl once every never.


When reading a Lesley Livingston book, you can expect certain things. Hilarity is one. A crazy unique idea is another. And characters that you just want to squeeze cause you love them so much is a guaranteed one. Where in the world are you going to find a book with a sexy nerd, time traveling blood curses, ancient Celtic druids, and two hilariously adorable best friends? Only in a Lesley Livingston book and Once Every Never had all this in spades.

Clare was just adorable. A bit naive at times, but in such an endearing way. I loved reading the story through her eyes and learning all the history with her quips and humor. She was a bit of a recultant narrator. At the beginning of the story, she didn't even like or know anything about Celtic history. It was great to see her evolve and adapt and bring her own twist to history. And what would a story be without a hot nerd? Cue Milo! He was such a sweetie, and I loved when he went all geeky all the while looking like a Greek god. A spectacular combination! Clare, Milo and Allie had such chemistry together, it was hilarious to read. Speaking of Allie, she was probably my favorite. I loved her enthusiasm, her smarts and her loyalty. She was a great friend to Clare and the two of them were too funny. I couldn't talk about the characters without talking about the ancient Celtic princess Comorra! My goodness, how freaking awesome was she! Such a strong, independent gal that just wanted to save everyone. And then there was Connal. Oh Connal, why you got to go and break my heart like that? He was such a brave and intriguing character, but had a dark, intimidating edge to him. I was never sure where he was going, or what he would do next but I just wanted it to work out well for him!

The storyline was absolutely fantastic. I had learned the story of Boudicca in Celtic history class, so it was really fun to read an interpretation of it! It was also really cool to learn about the bog bodies, which I'd only vaguely heard of. This book has really perked my already keen interesting in history, and now I just want to learn more and more about it! I also really enjoyed that we weren't just learning about the history in the book, but being transportated back to the time period. Time travel has always been a concept I enjoyed, and I think Lesley Livingston did it fantastically! There were points in the book that had my jaw dropping, and others that brought tears to my eyes. And then there were moments where I was laughing out loud and smiling like a crazy woman. I was always interested in the story, and found myself desperate to know what happens next!

Once Every Never was such a genuinely fun story. I enjoyed every moment of it! If you're looking for a nice, light, hilarious and interesting story look no further than Once Every Never!

Find This Book: Amazon | Goodreads | Lesley Livingston's Website
Posted by Ciara (Lost at Midnight) at 12:00 AM

Email ThisBlogThis!Share to TwitterShare to FacebookShare to Pinterest
Labels: Lesley Livingston, Once Every Never