Waiting On Wednesday (15): Rage Within by Jeyn Roberts 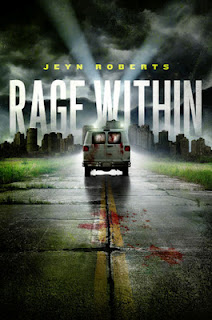 In this apocalyptic sequel to Dark Inside"'s "well-balanced, realistic suspense" (Kirkus Reviews"), four teens continue the struggle for survival as they face a world gone mad. Aries, Clementine, Michael, and Mason have survived the first wave of the apocalypse that wiped out most of the world's population and turned many of the rest into murderous Baggers. Now they're hiding out in an abandoned house in Vancouver with a ragtag group of fellow teen survivors, trying to figure out their next move.

Aries is trying to lead, but it's hard to be a leader when there are no easy answers and every move feels wrong. Clementine is desperate to find her brother Heath, but it's impossible to know where he'd be, assuming he's alive. Michael is haunted by the memories of his actions during his harrowing struggle to survive. And Mason is struggling with something far worse: the fear that he may be a danger to his friends.

As the Baggers begin to create a new world order, these four teens will have to trust and rely on each other in order to survive. (Summary from Goodreads)

I've returned to doing Waiting On Wednesday! I took a two week break because I wanted to concentrate more on reviewing which I was having a bit of trouble with recently. I didn't want my blog to turn into one of those "meme only" ones, so I decided to hold off posting memes and catch up on reviewing. Although I'm still a bit behind, I'm going to start back up with Waiting On Wednesday!

I am so ridiculously pumped for Rage Within. Petrified to read it, but excited nonetheless. Dark Inside is one of my favorite post-apocolyptic books. It's original, terrifying and so unbelievable captivating; one of those books it's just impossible to put down. Dark Inside left off with so much potential and the promise of many hard days to come. The characters, all of with I have a huge attachment to, have a battle in front of them, not just with the Baggers, but with their own evil lurking inside them.

Rage Within is going to scare me silly, have me checking my closet for Baggers, and keep my eyes glued to the page. It's going to be fantastic.

If you haven't read Dark Inside check out my review and see if it's something you'd be interested in! Trust me, it's amazing!