Review: I'd Tell You I Love You, But Then I'd Have to Kill You by Ally Carter

Title: I'd Tell You I Love You, But Then I'd Have to Kill You (Gallagher Girls #1)
Author: Ally Carter
Publisher: Disney Hyperion
Release Date: April 25th, 2006
Source: Purchased 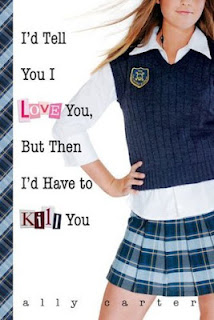 Cammie Morgan is a student at the Gallagher Academy for Exceptional Young Women, a fairly typical all-girls school-that is, if every school taught advanced martial arts in PE and the latest in chemical warfare in science, and students received extra credit for breaking CIA codes in computer class. The Gallagher Academy might claim to be a school for geniuses but it's really a school for spies. Even though Cammie is fluent in fourteen languages and capable of killing a man in seven different ways, she has no idea what to do when she meets an ordinary boy who thinks she's an ordinary girl. Sure, she can tap his phone, hack into his computer, or track him through town with the skill of a real "pavement artist"-but can she maneuver a relationship with someone who can never know the truth about her? Cammie Morgan may be an elite spy-in-training, but in her sophomore year, she's on her most dangerous mission-falling in love. (Summary from Goodreads)


Well, wasn't that an adorable novel.

I picked up I'd Tell You I Love You, But Then I'd Have to Kill You after much persuasion and prodding from my friend Crimson (okay, how many of my reviews have started off like that?). I spotted a deal on Amazon for the box-set of the first three novels, and decided to take a chance and purchase them. Although this first novel wasn't my favorite, I hear it gets much better and I can't wait to read more! I mean, an all-girls school for spies? What's not to love!

This first installment introduces us to the Gallagher Girls. They are brilliant, talented spies-in-training, inside of bubbly teenage girl packages. Cammie, Liz, Bex, and a late edition Macey, are hilarious and sweet, but also clever and creative. What I thought was both well done and intensely funny was the way the girls reacted to every situation. They had regular teenage problems, like wondering if a cute boy liked them, but they solved their problems with spy tactics. While normal girls might Google search the boy or theorize with their friends, the Gallagher Girls used e-mail hacking, surveillance techniques and every gadget imaginable to learn more about him. A little quirk that made this unique story a hilarious one. I wish I was a Gallagher Girl, cause they are seriously awesome.

Cammie and Josh, her non-spy love interest, were really cute together, and I thought it interesting watching her try and balance her "normal" girl appearance with her spy life.
But, while I did really enjoy the characters and the plot, there was something about the book that bugged me at points. I felt some scenes were a bit childish, and the story dragged at times for me. I felt it needed a bit of a push to get going, although by the end I was definitely hooked.

It was a short and sweet novel, and a series that has a lot of potential to be amazing. And from what I've heard, it goes way beyond amazing. I can't wait to dive back into the world of the Gallagher Girls. Really, who doesn't want to be a spy?

Find this book: Amazon | Goodreads | Ally Carter's Website
Posted by Ciara (Lost at Midnight) at 12:03 AM