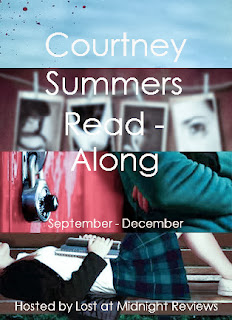 Today (actually yesterday but if you read my blog update here, you'll see I'm a bit behind on things) is the first day for SOME GIRLS ARE month! During the month of October, we will be reading Courtney Summers absolutely fantastic sophomore novel all about mean girls, high school, and revenge.

Get ready to be wrecked, guys, cause SOME GIRLS ARE is a punch in the gut (in the very best way). I find myself seeing it on the shelf sometimes and getting another wave of sadness just by looking at it. It's one of those books that sticks with you long after you've read the last page. I don't know if it ever fully lets you go. And I think that's important. I read SOME GIRLS ARE my final year of high school. I remember wondering how girls could be so incredibly mean to each other, how friendships could flip on a dime like that. There were a lot of mean girls at my school but I never really felt their wrath. It wasn't until later (until my best friend turned mean girl on me) that I really understood what it was like to deal with this kind of situation. Girls can be pretty terrible, and SOME GIRLS ARE shows what it's like to be one of those girls, and then to be destroyed by them. Courtney Summers doesn't write happy books, but truthful, powerful books and SOME GIRLS ARE is a stunner. Get ready guys, the Fearsome Fivesome are coming. 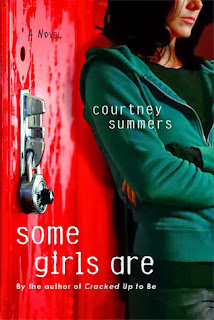 Climbing to the top of the social ladder is hard—falling from it is even harder.  Regina Afton used to be a member of the Fearsome Fivesome, an all-girl clique both feared and revered by the students at Hallowell High... until vicious rumors about her and her best friend's boyfriend start going around.  Now Regina's been "frozen out" and her ex-best friends are out for revenge.  If Regina was guilty, it would be one thing, but the rumors are far from the terrifying truth and the bullying is getting more intense by the day.  She takes solace in the company of Michael Hayden, a misfit with a tragic past who she herself used to bully.  Friendship doesn't come easily for these onetime enemies, and as Regina works hard to make amends for her past, she realizes Michael could be more than just a friend... if threats from the Fearsome Foursome don't break them both first.

Tensions grow and the abuse worsens as the final days of senior year march toward an explosive conclusion in this dark new tale from the author of Cracked Up To Be.


So, here's how the month is going to work. Each week we'll be reading designated chapters from the book (the list of chapters is below)! Every Sunday, there will be a discussion post about that week's chapters! You can read as fast or as slow as you want (aka you don't have to follow the schedule, that's just how we'll be separating the discussions), and I hope you guys will participate in the discussions on Sunday. Throughout the month, there will be guest posts, reviews, and other cool things (including giveaways)! You don't have to have signed up to participate! Just comment below.

Add your review/post/etc. for SOME GIRLS ARE to the link below! (If you didn't get a chance to link-up your review for CRACKED UP TO BE feel free to do so this month.)