Review: The Program by Suzanne Young 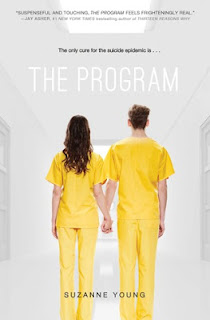 In Sloane’s world, true feelings are forbidden, teen suicide is an epidemic, and the only solution is The Program.

Sloane knows better than to cry in front of anyone. With suicide now an international epidemic, one outburst could land her in The Program, the only proven course of treatment. Sloane’s parents have already lost one child; Sloane knows they’ll do anything to keep her alive. She also knows that everyone who’s been through The Program returns as a blank slate. Because their depression is gone—but so are their memories.

Under constant surveillance at home and at school, Sloane puts on a brave face and keeps her feelings buried as deep as she can. The only person Sloane can be herself with is James. He’s promised to keep them both safe and out of treatment, and Sloane knows their love is strong enough to withstand anything. But despite the promises they made to each other, it’s getting harder to hide the truth. They are both growing weaker. Depression is setting in. And The Program is coming for them. (Summary from Goodreads)

It's been two months since I read The Program. It's taken me all this time just to get my thoughts on the page. I keep starting and stopping, starting and stopping because I don't feel my words can really describe this book in all it's glory. It was more than I could have expected, and it has stayed with me all this time. I still think about it. I still get that warm feeling it gave me. I still feel the urge to hug the book. It was spectacular and I connected with it completely. Suzanne Young, you are a star.

I was pretty apprehensive about The Program at first. I have a sensitivity to how mental health is portrayed in media and am always wary about books with them as a main focus. I don't like books that preach. I don't like books that tell me what I feel. I like books that show you the raw reality and nothing more. If the book is good enough, the readers should be able to draw their own conclusion. See the message behind without having it written in neon lights. I didn't have to worry with The Program though, because it handled the issues with grace and honesty. It showed how mental health affects people in different ways, and really focused on the characters and their experiences.

And those characters. My goodness, those characters. They had me in tears, had me laughing, had my heart aching, and had me feeling hopeful. Sloane was a superb, strong, and admirable narrator. She wasn't a perfect person, but a caring and realistic young girl facing extreme hardships. I just wanted to give her a hug, plant a seed of hope in her world but I didn't have to. She was strong enough to help herself and I was proud of her. And then there was James. My heart honestly hurts just thinking about how amazing he was. Such a genuine person, and a supportive boyfriend despite the deep depression he was suffering. He wasn't strong all the time, he wasn't a typical hero, but he was someone I was rooting for and someone I simply loved.

Things I love in books, and in YA books in particular, are genuine relationships. The kind where they fight, make up, and work together because they truly care about each other. They both have faults, but that makes their relationship stronger. James and Sloane were exactly that kind of couple and ugh, it made my heart go all pitter-pattery. I loved watching their relationship evolve and grow throughout the book, as they were each put through some difficult times. They truly loved each other for who they were and were willing to do anything for each other. It was a real relationship, and it had my heart in tatters.

Watching the scenes with The Program itself were terrifying. I was horrified by what they were doing to these people, and found myself near tears watching Sloane suffer through it. I was disturbed and livid that this was being allowed. But man, did it make for an interesting book.

On of the really interesting thing about The Program was the questions it raises. I'm not sure if this was intentional or not, but it definitely address the real-world problems associated with mental health awareness. The stigma of being mentally ill, the inability to talk about it because of that stigma, and what people suffering have to face were all topics that (at least I) saw in the book. Maybe I'm reading a bit into it (it's possible) but honestly, I'm fine with that. I also like that this story doesn't fit into a genre box. Is it dystopian? Is it contemporary? Is it sci-fi? Well, it's a little bit of all of them. It's not confined to a certain idea and it makes the story so much more.

Because the story is something amazing. Suzanne Young is a spectacular writer and created a captivating world. One that will drag you in and never let go. I really and truly adored it. Give this book a read. You will be so happy you did.