All Covered Up: NEW COVER for Stained by Cheryl Rainfield

So, a couple of months back, I was asked to participate in the cover reveal for Cheryl Rainfield's new book Stained. I got an email while I was in Ireland about the re-reveal for the NEW cover, but I was sadly too busy after Ireland to participate on the day of. But, I still wanted to showcase the new cover (which I really really like) so I'm doing that today! 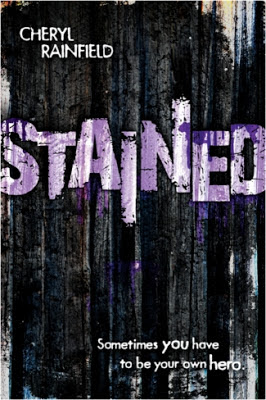 Seventeen-year-old Sarah Meadows covers the walls of her bedroom with images of beautiful faces she clips from magazines—and longs for “normal.” Born with a port-wine stain covering half her face, all her life she’s been plagued by stares, giggles, bullying, and disgust. Why can’t she be like Diamond, the comic-book hero she created? Diamond would never let the insults in. That’s harder for Sarah.
But when she’s abducted on the way home from school, Sarah is forced to uncover the courage she never knew she had. Can she look beyond her face to find the beauty and strength she has inside, somehow becoming a hero rather than a victim? It’s the only way Sarah will have any chance of escaping the prison—both seen and unseen—that this deranged killer has placed around her.

A little note from the author: Like I did with SCARS and HUNTED, I drew on some of my own experiences of bullying, abuse, and trauma to write STAINED and to give it greater emotional depth. Like Sarah in STAINED, I experienced abduction, imprisonment, periods of forced starvation, mind control, and having my life threatened. And like Sarah, I tried hard to fight against my abuser, keep my own sense of self, and escape. I hope readers will see Sarah's strength and courage, and appreciate her emotional growth as she reclaims herself.

“Powerful. I raced through it, wanting to know if Sarah would find a way to escape both her captor and her self-doubts. A real nail-biter! “
- April Henry, New York Times-bestselling author of The Girl Who Was Supposed to Die
“A compelling, gutting, and ultimately triumphant read. You won't want to stop turning pages -- Or blink. Or breathe. -- until you reach the very last one.”
-Jennifer Brown, award-winning author of Hate List

What do you guys think of the new cover? I'm definitely a fan! Stained is out OCTOBER 1st!