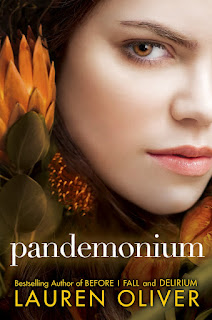 
*Warning: Plot spoilers for Delirium and Pandemonium*
I was pretty nervous to read this book. I absolutely, totally, and completely LOVED Delirium. The last paragraph still gives me goosebumps, and I want the quote "I love you. Remember. They cannot take it." tattooed somewhere on my body. While I had heard solely good things about the novel I also heard it was, in typical Lauren Oliver fashion, a heart-breaker. I couldn't resist the temptation long (or the frantic tweets from my friend Crim) and finally picked it up.

There were lots of things I loved about this book. In Delirium we were exposed to life in regular society: rigid, controlled, and loveless. Lena, as part of this society, follows the rules and doesn't question them. After the events at the end of the novel, Lena is a changed woman. She is brought into The Wilds and turned into a self-reliant survivor. It was very interesting, and a part of the novel I loved, to see Lena transform from this docile young girl, to a fierce member of the resistance. Lauren Oliver switched styles beautifully, darkening the tone of the series and giving us a harsh glimpse of life outside society's walls. I really liked having an overall view of this world, something I find is often lacking in many books. And the writing! Man, Lauren Oliver is crazy fantastic. She knows how to write a powerful and engaging story with believable characters and a fantastic plot line. Her writing itself never fails to amaze me. She gives me chills!

There were a few new characters introduced Pandemonium that left me with mixed emotions. I really liked Raven but I constantly felt suspicious of her intentions, and could never completely bring myself to believe in her. The same went with many members of The Wilds. And then there was Julian. Although I thought he was a perfectly fine person, what he caused I was not a fan of. So, this is when I talk about why I couldn't give Pandemonium five stars. It's a bit spoiler-y, as I mentioned above, so read on with caution.

Julian and his relationship with Lena kind of ruined the book for me. In Delirium the idea of love conquering everything was so prominent I felt like it defined the book. I've been a bit frustrated with YA romances recently, but Delirium was different and I loved all the messages it was sending. It was strong, powerful, and consuming. It made me want to get up and preach love from the rooftops! It made me so happy to live in a world where love was cherished. But, I felt like this message of hope that was said in Delirium was undermined in Pandemonium. For Lena to very quickly and easily fall into a new love, so soon after the loss of her previous one, confused the message of "love conquering all" for me.

I was also frustrated with the ending. Lauren Oliver is a fantastic writer and the Delirium series is superb both in concept and in execution. So, was it necessary to throw in that cliffhanger? I knew it was coming, and it was frustrating to have it thrown in at the end. Readers of the Delirium series will pick up Requiem without question. I felt it unnecessary to leave us hanging that way, and lessened the impact of the novel for me. I love cliffhangers, but I was not a fan of this one.

Now, I did love Pandemonium, don't get me wrong. It was a fantastic sequel in almost every way. Yes, there were a few things that irked me, but they didn't ruin the book for me. The Delirium series is one of the best romantic dystopians out there, and I highly recommend them! I'm very, very excited for Requiem and I can't wait to see how it all ends.