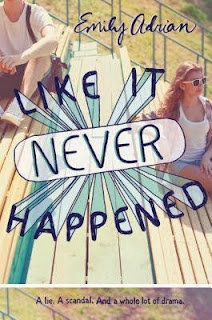 Stereotypes, sexuality, and destructive rumors collide in this smart YA novel for fans of Sara Zarr’s Story of a Girl, Siobhan Vivian’s The List, and E. Lockhart’s The Disreputable History of Frankie Landau-Banks.

When Rebecca Rivers lands the lead in her school’s production of The Crucible, she gets to change roles in real life, too. She casts off her old reputation, grows close with her four rowdy cast-mates, and kisses the extremely handsome Charlie Lamb onstage. Even Mr. McFadden, the play’s critical director, can find no fault with Rebecca.

Though “The Essential Five” vow never to date each other, Rebecca can’t help her feelings for Charlie, leaving her both conflicted and lovestruck. But the on and off-stage drama of the cast is eclipsed by a life-altering accusation that threatens to destroy everything…even if some of it is just make believe. (Summary from Goodreads)


This book was so unexpected. I picked it up thinking it would be a light, fun book about theatre kids and high school drama. What I got instead was a poignant, intense read about friendship and family and coming-of-age.  I was shocked and awed and emotional and angry. Honestly, I didn't expect to have such a reaction to this book. It surpassed my every expectation, and made it's way on to my 2015 favourites list.

One thing I just loved about this book was how real Rebecca was. She was most definitely a teenager. She made mistakes. She was over-dramatic. She didn't have the right answers. But she kept going, kept adapting, kept trying to figure out what to do and how to move forward. And I connected with her completely. She was a character to admire, and I loved being brought along for her journey.

There's not a lot I can say about the plot without spoiling, so I'm just going to say I loved it. There was so much going on and it was all really well thought-out and realistic. It was shocking at points and absolutely heart-breaking at others. I felt so immersed in Rebecca's world, in her story, I didn't want to let it go. There were so many important themes and ideas brought up here. I felt like I was being punched in the gut at some points, but in the very best way.

There's a lot of gray area in this book. A lot of things that are hard to process and harder to make sense of. As a reader (and as someone who appreciates true-to-life books) reading the gray areas here were hard but so, so thought-provoking. In certain aspects, the line between right and wrong was pretty clear. But, in others, it was hard to see where the separation was. And if these characters really understood how much damage they were causing. It was an element of this book that brought it to a whole other level for me.

The only real reason I couldn't give this book five stars was because I didn't feel some of the side characters were fleshed out. I didn't have a picture of them or who they were at points. But, I also think that was kind of what Rebecca was feeling. She was never quite sure where she stood in the Essential Five, and part of that was not really getting who these people were outside of the characters they portrayed. This really was Rebecca's story, and I was totally okay with that.

I never include favourite quotes in my reviews, but I'm doing it now cause this one stuck with me. I knew as soon as I read it that I had picked up a special book:


"Girls your age always think they will be rewarded for destroying themselves. And if that's what you believe, it's not your fault. But it also isn't true." -page 74
*note I checked this quote against the final version and it's correct*

I can name a bunch of different reasons why this line stuck out for me but I won't. It's powerful and poignant on it's own. This book was full of gems like this. I just want to read this book all over again to find them all.

Like It Never Happened hit me like a ton of bricks. This review doesn't do it justice, I'm telling you that right now. Read it, then come back and tell me how much you loved it.