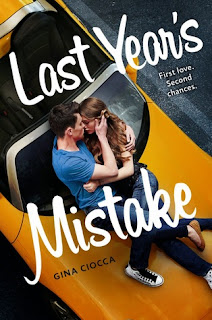 Before:
Kelsey and David became best friends the summer before freshman year and were inseparable ever after. Until the night a misunderstanding turned Kelsey into the school joke, and everything around her crumbled—including her friendship with David. So when Kelsey's parents decided to move away, she couldn't wait to start over and leave the past behind. Except, David wasn't ready to let her go...

After:
Now it's senior year and Kelsey has a new group of friends, genuine popularity, and a hot boyfriend. Her life is perfect. That is, until David's family moves to town and he shakes up everything. Soon old feelings bubble to the surface and threaten to destroy Kelsey's second chance at happiness. The more time she spends with David, the more she realizes she never truly let him go. And maybe she never wants to.

Told in alternating sections, LAST YEAR'S MISTAKE is a charming and romantic debut about loving, leaving, and letting go. (Summary from Goodreads)


Last Year's Mistake was 320 pages of emotions. From both the characters and from me. Because it didn't take long at all for me to become invested in Kelsey and David's story, to be so committed to it I ignored everything else until I was done. This was a great book, and a perfect one to take to the beach with you this summer.

I've become a bit of a YA romance fan in the last couple of years (something I did not expect to happen!) and Last Year's Mistake was the perfect edition to my awesome-romances list. It was heart-wrenching at points, but also so sweet. I loved the alternating chapters that switched between the past and the present. The dichotomy of watching Kelsey and David's relationship develop and reading about why it was broken really intrigued me. The chapters complimented each other well, and kept me absorbed for the whole novel.

I think one of the things I loved about this book was that it wasn't easy. Kelsey and David's relationship was messy and complicated. There were other people involved, misunderstandings, and miscommunications. You kind of wanted to yell at them to just talk it out, but being in that situation versus looking in on that situation are two very different things. The way the story played out felt authentic to me. And it stayed messy. Because life is messy, and I really appreciated that Last Year's Mistake didn't shy away from that.

Of course, Last Year's Mistake had it's fair share of cliched moments, but that didn't really take away from the story for me. Once I hit about the 100 page mark, there was no going back for me. I wanted to see how this story would turn out, and I wasn't putting the book down until that happened. I just needed to see what was going to happen with this story and these wonderful characters.

Speaking of characters, I loved David from the start. It was pretty hard not too! He was sweet and funny and the chemistry between him and Kelsey was undeniable. I loved every scene they had together, even when it was heartbreaking. In some respects, I could really identify with Kelsey. She was pushed out and bullied by people she considered to be her friends, something I experience when I was in school. I could empathize with her need for change, as scary as that can be. She didn't always make the best choices (neither did David!) but she learned and grew. I was really glad we were able to see the story from her perspective!

Although I was pretty focused on Kelsey and David, I did have some feelings about the side characters. Candy, in particular, stood out for me. She was a really solid friend, lots of fun, and had a strong backbone. Just the kind of person Kelsey needed in her life. Vi was a pretty cardboard character to me. I didn't really get much from her, until the very end and even then it wasn't enough to make me feel for her. And then, there's Ryan.

At first, I was solidly Not A Fan of Kelsey's current boyfriend Ryan. He just seemed like your typical egotistical jock, and I was counting down the pages until he was out of the picture. And although I really disapproved of some of his actions, I started to feel for him at the end. He grew as the story progressed, and I could see where a lot of his actions were coming from. He was a really interesting character, despite my first impression.

Overall, I seriously enjoyed Last Year's Mistake. It had some fabulous characters and a complex and honest storyline that will definitely have me reading it again. Add this one to your summer TBRs, guys. You won't regret it!