WHAT GOES AROUND is here! 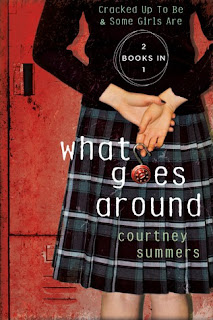 Courtney Summers fans are in for a treat! Two of her most critically acclaimed titles bound together for the price of one. In Cracked Up To Be, Perfect Parker Fadley isn’t so perfect anymore. She’s quit the cheerleading squad, she’s dumped her perfect boyfriend, and she’s failing school. Her parents are on a constant suicide watch and her counselors think she’s playing games…but what they don’t know, the real reason for this whole mess, is that a horrible thing has happened and it just might be her fault. In Some Girls Are, climbing to the top of the social ladder is hard--falling from it is even harder. Regina Afton used to be a member of the Fearsome Fivesome. And just like the other members of this all girl clique, she was both feared and revered by the students of Hallowell High... that is until vicious rumors about her and her best friend's boyfriend start going around. (Summary from Goodreads)


I think it's a fantastic idea to re-release these two books so that more people can enjoy them! And it is perfect timing, my dear read-alongers, because now you can get the first two books for the read-along for the price of one! What's not to love? I, personally, am really excited to have this pretty bind-up on my shelf next to all my other Courtney Summers' books.

In honor of the release (and thanks to the awesome people from St. Martin's Press), I'm offering up FIVE COPIES of What Goes Around!


Giveaway Rules:
- Must be 13 years or older
- Open to US/CANADA ONLY (sorry, international folks!)
- We are not responsible for lost or damaged items
- Enter the Rafflecopter form to enter
- You do not HAVE to be a part of the Read-Along but it's greatly appreciated if you are! (*hugs to Read-Alongers!*)

I want to say a huge THANK YOU to Sarah from St. Martin's Press for providing the copies and for being such a huge supporter of the read-along!

Email ThisBlogThis!Share to TwitterShare to FacebookShare to Pinterest
Labels: Courtney Summers Read-Along, giveaway, What Goes Around