Review: Cody and the Fountain of Happiness by Tricia Springstubb 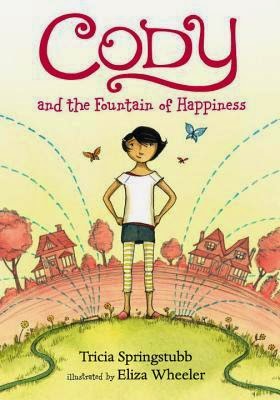 Middle-grade readers drawn to Judy Moody or Clementine will find a funny and charismatic companion in Cody.

For whimsical Cody, many things are beautiful, especially ants who say hello by rubbing feelers. But nothing is as beautiful as the first day of summer vacation, and Cody doesn’t want to waste one minute of it. Meanwhile, teenage brother Wyatt is moping over a girl, Mom is stressed about her new job as Head of Shoes, Dad is off hauling chairs in his long-distance truck, and even camp has been closed for the summer. What to do? Just when all seems lost, Cody bumps into a neighborhood boy named Spencer who is looking for a runaway cat. With a new friend and a soon-to-be-found cat, Cody is on her way to the fountain of happiness. (Summary from Goodreads)


I adore middle grade. Have I mentioned that recently? Because I do. Middle grade books are fun and sweet and magical and real. They excel in delight and adventure, and Cody and the Fountain of Happiness had that in spades. I hadn't heard of this one until it appeared in a package from the lovely peeps at Penguin Random House. I thought the cover was delightful and, when I had a spare afternoon, I decided to pick it up. The insides were just a delightful as the cover, and Cody was a star.

Cody is quirky. She's clever and friendly and determined. She loves summer and cats and her family. She's a little girl with a big heart. She may not always do the right thing, but she always has good intentions. And I really liked that about her. Her friend Spencer, the little boy next's door, was her perfect balance. He may not have been as adventurous, but he really believed in Cody. Add in a sweet old grandmother, an awkward older brother, a questioning babysitter, a loving mother, and an escape artist cat and you have quite the cast of characters. Each of them added something new and really helped Cody become that awesome little girl she is.

I think Cody is definitely targeted towards a younger audience (think more Ivy & Bean than Diary of a Wimpy Kid). That's not a bad thing but, on a personal level, I found it a bit harder to get into because of that. Now, I know I'm not the target audience so that doesn't really matter in the grand scheme of things. I think this book will be a lot of fun of for that age group. It's adventurous without ever leaving the confines of one neighbourhood street. It's charming with it's quirky cast of characters. It's sweet with it's message of becoming a family. It has a heck of a lot going for it and I think there's going to be a lot of little readers out there that love Cody. I just wanted a little something more. I wanted to connect to it more. On an outside level, I can look at all the positives. But I never fully connected to the story. Again, it's probably because an age thing. I don't normally read books targeted for younger middle grade so it was a bit harder to adjust to.

One of the big things I loved about this book was it's diversity! It's so nice to see such a diverse cast of characters in a middle grade book. I think it's so important kids read about diversity, so I was really happy that was a big element to the story. Another thing I adored was the illustrations. They were cute and quirky and perfectly matched the vibe of the story. There was one near the end of the book that took up almost both pages and I simply loved.

Overall, I couldn't connect to Cody and the Fountain of Happiness enough to love it, but I definitely liked it. It's definitely one I would recommend to little girls and boys looking for book with heart and fun. It's a book that will remind you to notice all the little things that add to your fountain of happiness.

Email ThisBlogThis!Share to TwitterShare to FacebookShare to Pinterest
Labels: 3 stars, ARC, Cody and the Fountain of Happiness, middle grade, received for review, Review