Review: Through to You by Lauren Barnholdt 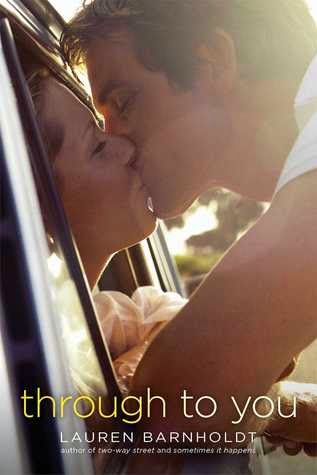 Opposites attract—and then complicate—in this romantic, relatable novel from the author of Two-Way Street and Sometimes It Happens.

It starts with a scribbled note in class: I like your sparkle. Harper had casually threaded a piece of blue and silver tinsel through her ponytail in honor of school spirit day. And that carefree, corny gesture is what grabs Penn Mattingly’s eye. Penn—resident heartbreaker of the senior class. Reliably unreliable. Trouble with a capital “T.” And okay, smolderingly sexy.

Harper’s surprised by Penn’s attention—and so is Penn. The last thing he needs is a girlfriend. Or even a friend-with-benefits. The note is not supposed to lead to anything.

Oh, but it does. They hang out. They have fun. They talk. They make out. And after a while, it seems like they just click. But Penn and Harper have very different ideas about what relationships look like, in no small part because of their very different family backgrounds. Of course they could talk about these differences—if Penn knew how to talk about feelings.

Harper and Penn understand their attraction is illogical, yet something keeps pulling them together. It’s like a crazy roller coaster—exhilarating, terrifying, and amazing all at once. And neither knows how to stop the ride…


This is a tough one, guys. It's tough because half of me really enjoyed reading this book. It was fun, and captivating, and romantic, exactly what I expect from a Lauren Barnholdt book. The problem is, the other half of me wasn't impressed or happy with some aspects of the relationship. And it's leaving me very, very conflicted.

It was smooth sailing at the start, though. I loved the quirky way Harper and Penn connected, and you could tell there was chemistry from the start. I was excited to watch this romance bloom and get to know these interesting characters. I loved their first encounter, and really wanted to see how these two very different people would work it all out. My heart-melted in some scenes, and I had quite the smile on my face at the start! Sadly, the middle of their story got a bit jumbled for me, and I started doubting their relationship.

My problem with Harper and Penn was simple: there wasn't a balance between the couple. Harper kept trying to establish a connection and Penn kept walking away. When I was reading Penn's perspective, I felt sympathy. I could see his pain oozing from every word he thought. He used anger to hide from his tragic circumstances, and it was pretty heart-breaking at points. I really enjoyed getting a glimpse into his head, and slowly unraveling what was truly going on. Although I don't think it was entirely fleshed out (particularly his relationship with his father), it was intriguing reading about Penn's life. And here's where another problem comes in. Because it wasn't just Penn's perspective in the novel, but also Harper's.

At first, Harper kind of got on my nerves. Her voice was a bit too much, and she was kind of repetitive. She grew on me though, and by the end I was a solid supporter of Team Harper. But, by about the middle of the book, I was getting upset about how Penn was treating her. Here's the crutch. If the book was told solely from Harper's perspective, I would not have wanted her and Penn to be together. She kept trying to connect to him and he kept shutting her down. It wasn't balanced. But, because I was also reading Penn's perspective, I understood why he was doing it. Which made me so conflicted. I could see both sides and they left me with different perspectives. I loved that Harper called Penn out on his actions. She didn't just let him get away with it, but pushed him for answers. It didn't always fix the problem and didn't always work, but I was happy she didn't just go with his crazy mood swings. By the end of the novel, I thought they found some semblance of balance, but it was a tough road and one I didn't fully support at times.

I have to say though, on a completely different note, I absolutely adored Anna. Yeah, she was a bit over-the-top, but she was a caring friend, and a brave girl and I really liked her interactions with Harper. I was also a fan of Jackson. Not at first, but I could slowly see where he was coming from, and loved how supportive he was.

Through to You, despite some of misgivings, had me captivated. I couldn't stop reading! I just really wanted to see Penn and Harper get a happy ending. I was pretty emotionally invested in their well being, and couldn't help but smile when their romance blossomed. I really did enjoy their story, I just wish their relationship wasn't such a run-and-chase one.

Although there were parts I couldn't quite get behind, I did enjoy reading Through to You. It was light and romantic and interesting and heart-melting. It was a great book for a warm sunny afternoon.

Email ThisBlogThis!Share to TwitterShare to FacebookShare to Pinterest
Labels: 3 stars, Lauren Barnholdt, Summer Books, Through to You