Courtney Summers Read-Along: Month Four: THIS IS NOT A TEST (+ Update!)

I can't even believe it. We're in the home stretch! Today marks the start of the LAST MONTH of the Courtney Summers Read-Along! *tear* I'm really sad that we've come to the end but I've had such an amazing time hosting this event. I hope you guys have enjoyed it too!

To give you guys a bit of an update: I have been absolutely swamped with school the last little while. I have an exam tonight, had two yesterday, and two essays I handed in on the 3rd. All my time has been devoted to trying not to fail, which means that the Read-Along has been put aside. Fear not though! After today, I actually have breaks between my exams (thank goodness) so I will be using it to catch up. SO here's a mini revised schedule!

After that, I'll be sticking to the original schedule and we'll end off this Read-Along with a bang! (There will be one giveaway going up in the next couple of days and possibly another one near the end of the month!)

I'm actually SO EXCITED to reread This Is Not a Test. It is, quite possibly, my favorite of Summers' books and I'm looking forward to returning to this story. I know some of you might be put off by a zombie book (or you could be all YAY ZOMBIES, who knows) but this book is about so much more than that. If you want to hear my thoughts, I reviewed This Is Not a Test when it came out last year. I hope you love it as much as I do! 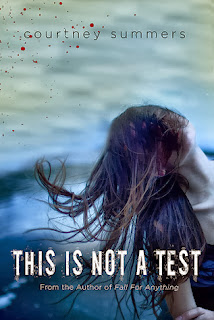 It’s the end of the world. Six students have taken cover in Cortege High but shelter is little comfort when the dead outside won’t stop pounding on the doors. One bite is all it takes to kill a person and bring them back as a monstrous version of their former self. To Sloane Price, that doesn’t sound so bad. Six months ago, her world collapsed and since then, she’s failed to find a reason to keep going. Now seems like the perfect time to give up. As Sloane eagerly waits for the barricades to fall, she’s forced to witness the apocalypse through the eyes of five people who actually want to live. But as the days crawl by, the motivations for survival change in startling ways and soon the group’s fate is determined less and less by what’s happening outside and more and more by the unpredictable and violent bids for life—and death—inside. When everything is gone, what do you hold on to?


So, here's how the month is going to work. Each week we'll be reading designated pages from the book (the list of pages is below)! Every Sunday, there will be a discussion post about that week's chapters! You can read as fast or as slow as you want (aka you don't have to follow the schedule, that's just how we'll be separating the discussions), and I hope you guys will participate in the discussions on Sunday. Throughout the month, there will be guest posts, reviews, and other cool things (including giveaways)! You don't have to have signed up to participate! Just comment below saying you want to join.


If this is your first read or your fourth, thank you guys SO MUCH for participating. I can't wait to hear what you guys think!

P.S. I also wrote a post last week about depression and books that you can read here (if you're into that sort of thing).
Posted by Ciara (Lost at Midnight) at 12:00 AM