Waiting on Wednesday (10): The Kill Order

Waiting On Wednesday is a weekly meme hosted by Jill over at Breaking the Spine, in which bloggers talk about the books they are most eager for!
This week's pick: The Kill Order (Maze Runner 0.5) by James Dashner
Publisher: Delacorte Press
Release Date: August 14th, 2012 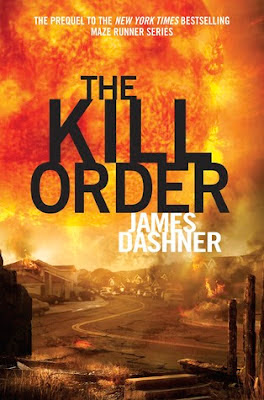 Before WICKED was formed, before the Glade was built, before Thomas entered the Maze, sun flares seared the earth and mankind fell to disease. "The Kill Order" tells the story of that fall.

The Maze Runner trilogy was one of those heart-stopping, edge-of-your-seat kind stories that doesn't let you put the book down until the final page is turned. I loved the characters and the intelligent plot line, which quickly made it one of my favorite series. To be entirely honest, I was a bit disappointed with The Death Cure, and found it to be unsatisfying and frustrating. I'm really hoping The Kill Order will fully explain everything, satisfy those loose ends, and keep me captivated just like the other three.

This prequel tells the story before The Maze was created, the fall of humanity to devestating sun flares, and the disease that destroyed the survivors. It's going to be really interesting, and no doubt heart-breaking, reading about how the world we  came to fear in the trilogy was created. James Dashner is sure to deliver a racing plot filled with lovable characters, lots of terrifying moments, and a story unlike any other.


This prequel to the Maze Runner trilogy will be out August 14th! Just a couple days after my birthday!


What books are you waiting for this week?


-Ciara who is lost at midnight
Posted by Ciara (Lost at Midnight) at 12:00 AM