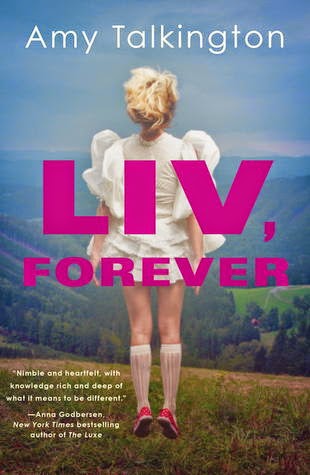 When Liv Bloom lands an art scholarship at Wickham Hall, it’s her ticket out of the foster system. Liv isn’t sure what to make of the school’s weird traditions and rituals, but she couldn’t be happier. For the first time ever, she has her own studio, her own supply of paints. Everything she could want.

Then she meets Malcolm Astor, a legacy student, a fellow artist, and the one person who’s ever been able to melt her defenses. Liv’s only friend at Wickham, fellow scholarship kid Gabe Nichols, warns her not to get involved, but life is finally going Liv’s way, and all she wants to do is enjoy the ride.

But Liv’s bliss is doomed. Weeks after arriving, she is viciously murdered and, in death, she discovers that she’s the latest victim of a dark conspiracy that has claimed many lives. Cursed with the ability to see the many ghosts on Wickham’s campus, Gabe is now Liv’s only link to the world of the living. To Malcolm.

Together, Liv, Gabe, and Malcolm fight to expose the terrible truth that haunts the halls of Wickham. But Liv must fight alone to come to grips with the ultimate star-crossed love. (Summary from Goodreads)


Before I start talking about what's inside the book I have to talk about the stunning case it comes in. The cover of Liv, Forever is one of my absolute favourites. I mean, the scenic landscape, the bold title, and a floating girl?! How could it get any better! It's striking, gorgeous and a stand-out, for sure.

I hadn't heard anything about this book until I got an email asking if I wanted a copy. And, as soon as I read the description I knew I needed to read it. Because Liv, Forever is narrated by a ghost! A GHOST. How cool is that? It instantly drew me in, but then when I heard it was at a prep school with secret societies I started flailing. Because those are three of my absolute favourite things to read about. The boarding school setting in Liv, Forever was absolutely haunting. The dank passageways, the ornate buildings, and that foreboding forest gave me to chills. As did the perilous issues Liv had to face. It was such a unique idea to have this ghostly narrator, and I really enjoyed getting to read her perspective and the brief perspectives of the other ghostly girls, too. Each chapter added a more and more ominous air to the book until I was at the edge of my seat, waiting for it to all come to a head! Liv, Forever stayed glued to my hands until the very end!
At the start though, I was slightly put off at the start with the constant art references. I'll be the first to admit I know absolutely nothing about art. It's never really been something that interests me. So, when Liv and Malcolm went into detail about the artists they loved I just kind of stared at the pages in confusion. I had no idea what/who they were talking about, and found myself feeling distanced from their story. That being said, the scenes with Liv physically drawing (especially ON Malcolm) were intriguing, and enjoyable to read.

Speaking of Malcolm, I think if I was a bit younger (back when insta-love made me swoon like nobody's business) I would have been all over him and Liv. But, I think their relationship was a bit too quick for me now. Although, she does die not long after they meet so it's not really their fault either! As characters though, I really liked them both. Liv was an interesting protagonist, not just because of her ghostly status. She was artistic, and caring, and determined, all qualities I admire. Malcolm was thoughtful and angsty, which totally puts him on my swoon list. Together, I really think they clicked. Seriously, those scenes where they were drawing on each other had my heart swelling. I think they were a couple that would definitely work well together, had they had a bit more time to develop their relationship.

As for the other main character...I really wanted to love Gabe, but I could never bring myself to fully being a fan. He's a misfit, outsider in this blue blood, prep school world, and that combination is usually one of my favourites! But, although there were definitely many moments where I adored the guy, I found him to be a bit too angry and judgmental overall. I totally understand why he was so angry, but it I couldn't help but be a bit put off by it.

I think the reason I couldn't really love this book was just because I felt a sort of disconnect with it. I was never fully committed to the story. Yes, I really wanted to know what happened, and yes, I adored the idea and the setting, but there was always something that held me back from truly loving it. I think it was just a mixture of the writing and the insta-love (which was a pretty big driving force behind Liv and Malcolm's motivations) that diminished my love a bit. That's not to say I didn't like the book, because I really did!

Overall, Liv, Forever was a haunting, delicious read that I really enjoyed reading. Atmospheric and creepy, diving into this world was an absolute treat!